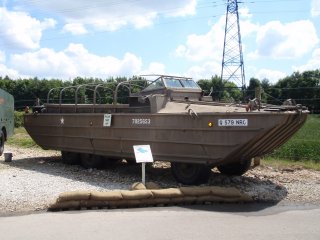 Throughout the United States, it is still possible to take a "Duck Boat" tour in a vintage World War II vehicle that is able to go from road to river and back again.

Meet the DUKW, a type of transport that was designed to get artillery, supplies and most notably Allied soldiers ashore during the Second World War. The DUKW moniker came from its maker General Motors' manufacturing code: D for the 1942 model, U for amphibious, K for all-wheel drive and W for dual rear wheels. This was simplified to "ducks," which was fitting as the vehicles were in essence boat-trucks, which could drive from water onto land.

The DUKW simplified the time-consuming process of unloading cargo ships in part because the vehicle could be pre-loaded and could drive out of the ship, cross open water and drive straight onto the beach. The DUKW made its debut during the 1943's Operation Husky, the codename for the invasion of Sicily, but proved invaluable in its ability to transition from land to river. In March, 1945 the Allies relied on DUKWs to help cross the Rhine River into Germany.

The boat-trucks were used alongside 11 regiments of "Hobart's Funnies," the Churchill and Sherman tanks fitted with anti-mine flails, flamethrowers and bridging equipment.

Some 21,000 DUKWs were produced and these were supplied to the U.S. Army and Marine Corps. – where the craft were used to cross the coral reefs of islands on Saipan and Guam – but more than 2,000 were supplied to the British Army under the Lend-Lease program while hundreds were also supplied to the Australian Military and even to the Soviet Red Army. The latter produced its own version as the BAV 385, which were used by various Warsaw Pact forces and even by the Soviet's Middle Eastern allies up until the 1980s.

Great Britain used some of its DUKWs during the Malayan Emergency and later during the Indonesia-Malaysia Confrontation. The U.S. Army also deployed several hundred of the amphibious vehicles during the Korean War, where these were used in the Battle of the Pusan Perimeter and in the amphibious invasion at Inchon in 1950.

Many were sold off after the Second World War however, and the first "Duck Tour" began in Wisconsin Dells, Wisconsin and still operates as the Original Wisconsin Ducks.

Sadly there have been some tragedies, including a 2018 accident that resulted in the deaths of 17 people when a DUKW became swamped while on Table Rock Lake in Branson, Missouri. It has been reported that the craft used in the Branson accident were actually replicas of the original World War II or Korean War DUKW, and while that was not likely a factor – the military had warned for years that the vehicles could become unstable in rough waters. Even in remotely rough waters the vehicles can be unsafe.

"More than 70 years later, many are still in operation, though not without some difficulties," Adams-Graf told The National Interest. "Besides the obvious dwindling supply of vehicles and parts, deadly accidents involving the vehicles have plagued the industry."

In many cases, it isn't actually the vehicles that have been the problem.

"Whether surplus DUKWs are safe as tourist vehicles is becoming a moot point," Adams-Graf added. "Most DUKW-operating businesses have moved away from the WWII surplus vehicles, replacing them with very similar looking new creations. Regardless, any vehicle being operated as a tourist attraction has to be government-certified as safe. Most incidents involving DUKWs can be attributed to operator failure rather than equipment-failure. So, yes, DUKWs are safe – training, though, may be lacking making them less safe."

While there have been calls by some to ban such Duck Tours, the fact remains that the mighty DUKW proved it was a flightless warbird that helped ensure victory in World War II.