During World War II, the ‘Wooden Wonder’ Freed Prisoners from the Air 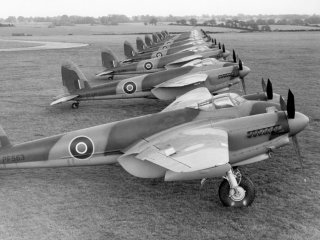 Special operations forces are famously known today for a special task—hostage and prisoner rescue. These missions usually entail the usage of special operators or boots on the ground to conduct these high-risk operations. Examples of these special operations include the Son Tay raid (1970), the raid on Entebbe airport (1976), and the Iranian Embassy siege (1980). Nonetheless, and uniquely innovative, the Royal Air Force (RAF) had also conducted special operations freeing prisoners without using ground troops during World War II but by using Mosquito light bombers with rudimentary navigation and flying aids conducting low-level precision bombing.

How were these possible?

The de Havilland Mosquito light-weight bomber or better known as the “wooden wonder” made these dangerous aerial special operations feasible. The Mosquito was made mostly of wood as it was more abundant than metal during the early desperate days of World War II in Great Britain. The British also had numerous wood-making and carpentry factories. This lightweight material yielded an aircraft that was able to fly fast and low with high manoeuvrability. The twin-engine wooden wonder was capable of flying at speeds of over 400 mph, one of the fastest aircraft at that time. It could carry a bomb load of up to 4,000lb with a range of 1,500 miles.

The Mosquito had been used in various roles during WWII such as night fighter, light bomber, reconnaissance, anti-submarine, jamming of enemy air defence radars, and as pathfinders for large bombing raids.

Operation Jericho was conducted on February 18, 1944, to free about 700 prisoners (mostly resistance fighters) in Amiens, France. The prison was located in a cross-shaped building with twenty-foot tall and three-foot-thick walls. As some of these prisoners were slated to be executed soon, the local French resistance cell requested help to rescue the prisoners.

Sixteen Mosquitoes flew the two hours journey to Amiens at just 100 feet, avoiding radar detection to ensure a successful surprise attack. The Mosquitoes dropped sixteen 500lb bombs with eleven-second-delay fuses at the prison, successfully blowing the cell doors open by concussion and destroying parts of the wall. The prison guardhouse was also hit, killing some of the German guards having lunch there. The British attacking force lost three Mosquitoes in the attack. The bombing resulted in a total of 258 prisoners escaping and fifty Germans were killed. The successful operation provided a template for further accurate precision bombing attacks against Gestapo prisons.

Operation Carthage was launched a year later on March 21, 1945, to free prisoners held by the Gestapo at the Shellhaus in Copenhagen, Denmark. There was a request from the Free Danish Resistance for an RAF bombing attack to prevent the impending execution of resistance prisoners and freeing them as well as to destroy the Gestapo archives on resistance activities in Denmark. Operation Carthage was conducted by eighteen Mosquitoes which flew 350 miles to their target and attacked the Shellhaus from rooftop level, partially destroying it—which enabled thirty of the prisoners to escape—and successfully destroying the Gestapo archives. The raid also killed 151 Germans and Gestapo collaborators. More tragically, a school nearby was also mistakenly bombed during the raid killing eighty-six schoolchildren and eighteen teachers. The RAF lost four Mosquitoes in the raid.

These audacious aerial special operations by RAF Mosquitoes demonstrated that even airpower can rescue prisoners without boots on the ground and exemplified the importance of unconventional thinking in the successful conduct of special operations. The wooden Mosquito’s unique capabilities in performing fast, nimble low-level precision strikes and flew by extremely skilful and courageous pilots produced some spectacular wonders during World War II.

Adam Leong Kok Wey is associate professor in strategic studies, and the Deputy Director (Research) in the Centre for Defence and International Security Studies (CDiSS) at the National Defence University of Malaysia. His latest books are Strategy and Special Operations from Eastern and Western Perspectives published by NDUM Press (2021) and Killing the Enemy! Assassination Operations During World War II, published by Bloomsbury (2020).