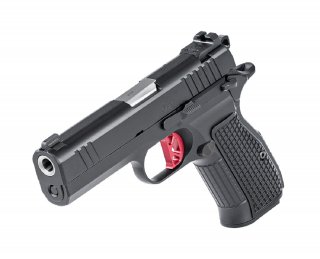 It would be forgivable to have a case of mistaken identity when it comes to the Dan Wesson DWX Compact pistol. First, the handgun, which was introduced earlier this year at the 2020 SHOT Show (Shooting, Hunting, Outdoor Trade Show), could be easily confused with rapper/songwriter and actor DMX who has appeared in a number of action films with various firearms. And if he doesn’t eventually make a movie or rap video appearance with the DWX Compact then we can only consider that a missed marketing opportunity.

To the other point, if the DWX Compact looks like the result of a mating of the Dan Wesson 1911 and a CZ-75 that is because it is—a heavy steel pistol mashup that took the best elements of each including the CZ-75’s ergonomics and frame and 1911 slide and top half as well as the trigger. It features CZ-75 low-profile aluminum grip panels, which feature a Ned Christensen style frag pattern to provide a more natural and instinctive grip on the handgun.

According to Dan Wesson Firearms, “It started as an experiment—a grand melding of Dan Wesson and CZ pistols. Borrowing the crisp single-action fire control group of a DW 1911 and combining it with the ergonomics and capacity of a CZ, the resulting pistol emerged as something great.”

Designed initially for competition use, the DWX Compact has evolved into much more. Gone is the 1911 link system in favor of the simpler CZ-style takedown with a lever and this allows for easy removal of the Match-grade barrel due to the bushing-less barrel system that is based on the P-10 or P-09/P-07 handguns.

The DWX Compact also features a 1911-style ambidextrous thumb safety, which makes for easy operation for both right- and left-hand shooters. The sights are a solid mix of both guns, including a 1911 dovetailed style front and CZ Shadow 2 at the rear. It further includes a Picatinny rail that allows for a variety of accessories to be attached including a weapon light or laser device.

The DWX Compact is chambered in 9-millimeter and feeds from a 15-round magazine. The single-action pistol is also compatible with CZ 75 magazines and that includes the 26-round CZ-75 magazines. As the name suggests it is compact for carry, measuring 7.57-inches long, 5.21-inches tall, and a slim 1.24-inches wide. It weighs just 28.5 ounces unloaded. The handgun is available now with and MSRP is $1,799.