Ebola Survivors Can Pass on the Virus Through Sex 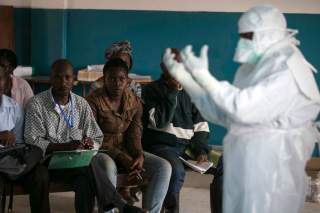 The current Ebola disease outbreak in the Democratic Republic of the Congo (DRC) is the second largest in history. It has been raging for over a year with no indication that it is nearing an end. Many of the issues that prevent effective containment of Ebola disease outbreaks have been discussed. These include porous borders, community mistrust of health workers, and the spread of misinformation.

But one area that requires further study is Ebola virus’ persistence in the reproductive systems of otherwise healthy survivors. Understanding how Ebola disease outbreaks are exacerbated by sexual transmission is important to stop new chains of transmission and to prevent the disease from spreading to new geographic regions.

Multiple reports strongly suggest that re-emergence of Ebola disease is linked to persistent infections and sexual transmission from survivors. What this means is that people who have survived infection by Ebola virus – and who no longer show any symptoms of the disease – can continue to carry the virus and pass on the infection months after they have recovered.

Our research group recently reviewed the current understanding of rates and mechanisms of Ebola virus persistence in male disease survivors. We are using this information to fill in gaps about how persistence relates to sexual transmission of the virus.

The role of the reproductive system

Nearly everything known about Ebola virus persistence in the reproductive system has resulted from testing semen of West African Ebola disease survivors.

It has been established that the Ebola virus can be detected in semen long after it is cleared from other organs and tissues. For example, a recent study showed that the virus could be detected in 50% of male survivors 115 days after recovery and may linger for up to three years.

The virus has also been detected in semen at concentrations greatly exceeding that found in the blood at peak infection. The data suggests that this occurs in the absence of any symptoms of disease. In addition, sexual transmission of Ebola virus from male survivors has been reported up to 18 months following their recovery.

These observations are important to public health. Firstly, long-term persistence of Ebola virus could lead to the initiation of new chains of disease transmission long after outbreaks have ended. Secondly, the presence of high concentrations of virus in the semen in the absence of disease symptoms means that male survivors could carry and transmit the virus without knowing they’re still infected.

But the fact that only semen is being used in these studies presents a problem. This means that the perseverance of the virus is only being traced in males. This means that little is known about persistence of the virus in women. This urgently needs attention because Ebola virus has been detected in female survivors up to 15 months following recovery, and there are recorded cases of female to male transmission.

There is a strong need for greater understanding of Ebola virus infections, including:

By infecting mice with Ebola virus, we can determine whether the male reproductive system is damaged by persistent infection. We can also determine if there is an effect on fertility, and how often persistent infections result in sexual transmission. In addition, infections of female mice help us determine the severity of disease caused by sexually transmitted Ebola virus, the effects on female fertility, and consequences for gestational development.

In addition to our laboratory research, we are surveying Ebola disease survivors in Sierra Leone in an effort to identify and understand the long-term health consequences, with a focus on reproductive health. Our goal is to determine if survivors have encountered post-recovery reproductive complications such as reduced fertility or problems during pregnancy.

We are also investigating whether Ebola disease survivors face greater burdens of subsequent infections by other pathogens.

The recent success of vaccination and therapeutic treatments in the current DRC Ebola disease outbreak provides hope. But a great deal about the virus remains unknown. A greater understanding of the mechanisms of how persistent infections occur will help us guide future outbreak response efforts, with the goal of reducing additional Ebola virus transmission events and providing increased care, support and safety for survivors and their communities.