The Eielson Air Force Base Is Going Nuclear 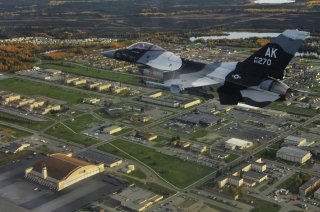 This month the Department of the Air Force announced that it had selected Eielson Air Force Base (AFB) to host its first micro-reactor. The base, which is located in the interior of Alaska, was selected in a project that began in 2019 when a National Defense Authorization Act (NDAA) requirement to identify potential sites for developments and operation of a micro-reactor by 2027 began.

The commercially-owned, next-generation reactor—which will be U.S. Nuclear Regulatory Commission licensed—is also scheduled to go into operation by that time, and it will provide the installation with a clean, reliable, and resilient nuclear energy supply technology for critical national security infrastructure.

"Energy is a critical asset to ensure mission continuity at our installations," said Deputy Assistant Secretary of the Air Force for Environment, Safety, and Infrastructure Mark Correll. "Micro-reactors are a promising technology for ensuring energy resilience and reliability, and are particularly well-suited for powering and heating remote domestic military bases like Eielson AFB."

As with many U.S. military bases and other installations operated by the U.S. military, Eielson is located in a remote, inaccessible region. Supplying it with electricity and heating can often be a formidable task. In the case of Eielson AFB, it regularly requires hauling in tons of coal to provide it with 33.5 megawatts of electricity. In addition to the environmental impact, it is expensive and logistically challenging.

Moving the coal ties up personnel that could be better utilized elsewhere, and this problem isn't unique to the base in Alaska. This is why the Air Force is exploring other options, including the use of nuclear energy as a cleaner and simpler alternative.  A micro-reactor could be the answer, as these are factory-built, modular, and do not always require water for cooling.

"This technology has the potential to provide true energy assurance, and the existing energy infrastructure and compatible climate at Eielson make for the perfect location to validate its feasibility," added Mr. Correll.

Moreover, the simplified design could provide direct heat for the base, as well as electricity. According to NewAtlas, because of the large surface-to-volume ratio, micro-reactors are also easier to cool and are self-regulating. That means if the nuclear reaction were to become too robust, the heating naturally tamps down the reaction, which would eliminate the need for a large crew of skilled operators.

A micro-reactor may also need to be refueled once every ten years. These could be built and assembled in factories with modules and then shipped to the respective base for installation. If this pilot plant proves successful, micro-reactors could be used on other bases—but also by civilian communities, at mining sites, oil fields, and other areas where power is needed.

The Deputy Assistant Secretary of the Air Force for Environment, Safety, and Infrastructure is now working with the Air Force Office of Energy Assurance, the Office of the Deputy Assistant Secretary of Defense for Environment & Energy Resilience, the Department of Energy, and the Nuclear Regulatory Commission to facilitate the micro-reactor pilot, and to ensure this pilot is conducted with safety as the number one priority.