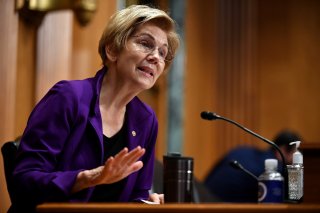 Sen. Elizabeth Warren (D-Mass.) accused Wall Street of helping to facilitate climate change by investing in pollution, claiming that the financial services industry should be subject to regulation.

In a tweet, Warren cited a report jointly authored by the Center for American Progress (CAP), a liberal think tank, and the environmentalist Sierra Club. The report claimed that eight of the largest ten U.S. banks, as well as all ten of the largest asset managers, were together responsible for financing the creation of two billion tons of carbon dioxide emissions – a figure roughly equivalent the annual CO2 output of Russia. According to the report’s authors, even that number is likely an underestimate, as it is “based only on the limited publicly available data for a select number of institutions.” Institutions are presumed to have underreported their CO2 output because they are not legally required to disclose the information in full.

“The volume of greenhouse gas emitted by the financial-services industry is outrageous,” Warren wrote, linking to a Bloomberg story about the report and observing, as the report’s authors had, that if Wall Street was its own country, it would rank as the fifth-largest emitter of greenhouse gases in the world. “Regulators need to crack down.”

The CAP-Sierra Club report concludes that, as the effects of climate change worsen, the financial industry is likely to be impacted. “Efforts to mitigate emissions will only become more challenging and costly” over time if not mitigated beforehand, the report’s authors warned.

In a partial attempt to solve the problems it addressed, the report suggested that the Biden administration help by “stress testing” banks’ ability to absorb losses from climate change.

The Biden administration has indicated that the Securities and Exchange Commission (SEC), the branch of the federal government responsible for overseeing and regulating the activities of the financial sector, will soon propose rules requiring companies to make the climate risks of their activities public information.

Earlier in the month, Warren wrote to SEC director Gary Gensler, warning that major energy companies with significant carbon footprints, such as oil companies, might be submitting false figures on their CO2 production to the agency in order to receive higher compensation packages for their leadership.