Elizabeth Warren Has It Wrong: Billionaires Are a Good Thing 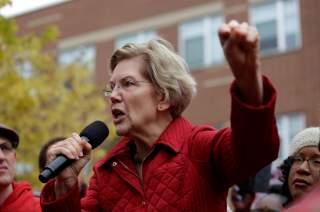 Wealth inequality seems to have become a more important political issue than income inequality. It seems like almost every day, another superrich American is offering their thoughts on taxing the rich, generally, and Elizabeth Warren’s wealth tax idea, specifically. Helpfully, I recently podcast chatted with AEI economist Michael Strain about wealth inequality and what, if anything, public policy should do about. Here one key section from that long conversation:

Pethokoukis: One study says that the 400 richest Americans — which is the top 0.00025 percent of the population — has tripled their share of the nation’s wealth since the 1980s. That led wealth concentration to levels last seen during the Roaring Twenties. Another study finds that the wealthiest one percent of American households own 40 percent of the country’s wealth, which has also increased markedly in recent decades. Do you have any moral discomfort with those those numbers?

Strain: No, I don’t. I think that there’s no question that there are some really wealthy people in the United States. And if you add up all the wealth in the country, you know, those people hold a disproportionate share of it. That doesn’t strike me as socially unjust, or morally offensive in any way. What I think about is how they make their money. And that’s where I think that we should be looking when we think about whether this is a just outcome. The richest person in the United States is Jeff Bezos. Jeff Bezos has done enormous things for society and for the economy. Jeff Bezos is fabulously wealthy, but he has captured only a small, small share of the total value that he’s created for society. So that doesn’t strike me as unjust at all. You know, Bill Gates is incredibly wealthy, and he’s done amazing things.

Pethokoukis: Don’t we have to think differently about heirs than we do about people who actually made the companies? The children of Jeff Bezos will be fabulously wealthy. How does that help most families that they get to keep all of that wealth?

Strain: When we’re thinking about whether or not the distribution of wealth is a socially just outcome, I think it certainly makes sense to think about inventors and entrepreneurs differently than their heirs. But when I think about their heirs, I’m quite comfortable with their heirs having inherited that money.

I mean, what’s the alternative? Should billionaires spend as much money as possible while they’re alive so that they leave less inheritance? I don’t know why that’s better. The money’s not sitting under the mattress, right? If they’re not spending it, it becomes available for people to borrow and that helps people, and the economy. Should the government reach in and take it? I have problems with that type of punitive, confiscatory tax. And so if it’s not being used for consumption and it’s not being paid for in terms of tax revenue, then it has to be saved. And if it’s saved it has to be given to somebody. I think it’s quite laudable that some billionaires want to give their money to philanthropic causes, but it’s their money — they earned it. If they want to give it to their kids, that strikes me as a perfectly reasonable thing to do.

Pethokoukis: So what if America gets a big wealth tax? So what if  person a who’s worth $40 billion will eventually be worth $25 billion?

Strain: Senator Warren’s wealth tax would significantly reduce Jeff Bezos’ ownership share of Amazon, for example. Does that affect the way that Bezos does his job or conducts his life? Probably. Do I think that taking close to 20 percent of the returns from innovation and entrepreneurship from the most successful people would affect the people who wanted to be innovators? …

I would be surprised if everything stayed the same, and it seems like a pretty large gamble to make. And I think it shows a need to step back and say, “What are taxes for?” Are taxes for financing government programs that we think are important, or are taxes for trying to knock the top 75,000 wealthiest households down a peg and reduce their political influence? Or to reduce their wealth in order to change the wealth statistics? The wealth tax seems to be more about reducing those fortunes because we don’t like the fortunes — Bernie Sanders has said that there should not be billionaires.

Pethokoukis: People say that if there are any billionaires at all, it means something has gone wrong with public policy.

Strain: Right, and I think that’s remarkably shortsighted. It is very difficult to argue that the world would be better off if we didn’t have Jeff Bezos and Bill Gates. And we should want there to be more of them, but you’re not going to have them if people can’t amass significant amounts of wealth.

Pethokoukis: Are there any changes you would make to the tax code? Maybe where wealthier Americans do get tax breaks, or where we spend tax expenditures where we shouldn’t?

Strain: Sure — we still spend a lot of money through the tax code and we shouldn’t do that. That’s bad for economic efficiency, and a lot of that spending goes to higher-income people. That’s not where we should be putting public dollars. So there are lots of ways to raise revenue that don’t involve having special, punitive tax rules for the top 0.06 percent of households.