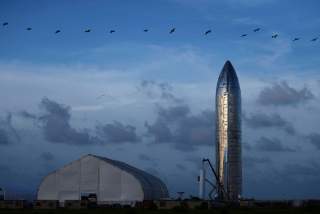 Elon Musk, founder of private space-faring company SpaceX, recently unveiled his new Starship craft. Amazingly, it is designed to carry up to 100 crew members on interplanetary journeys throughout the solar system, starting with Mars in 2024.

The announcement is exciting, invoking deep emotions of hope and adventure. But I can’t help having a number of moral reservations about it.

Musk has declared a fascinatingly short time line to achieve orbit with this rocket. He wants to build four or five versions of the vehicle in the next six months. The first rocket will do a test launch to 20km within a month, and the final version will orbit the Earth.

Whether this is possible remains to be seen. Bear in mind that in the early 1960s when the then US president, John F Kennedy, announced the race to the moon, it took nearly a decade to achieve and several crew members died during the testing phases.

Despite this, it has been an important goal since the beginning of the space age for people to travel between planets – helping us to explore, mine and colonise the solar system.

There are many reasons to believe SpaceX will succeed. The company has been extremely impressive in its contribution to space, filling a gap when government agencies such as NASA could not justify the spending. It’s not the rocket technology that I doubt, my concern is mainly astrobiological.

If life exists elsewhere in our universe, the solar system is a good place to start looking – enabling us to touch, collect and analyse samples in a reasonably short time. Along with some of Jupiter’s and Saturn’s moons, Mars is one of the top contenders for hosting some sort of microbial life, or for having done so in the past.

However, there is a risk that microbe-ridden humans walking on the red planet could contaminate it with bugs from Earth. And contamination may threaten alien organisms, if they exist. It may also make it impossible to figure out whether any microbes found on Mars later on are martian or terrestrial in origin.

A mission to return samples from Mars to Earth is expected to be completed by the early 2030s, with all the collection work completed by sterilised robots. While such missions pose a certain risk of contamination too, there are rigorous protocols to help minimise the chance. These were initiated by the Outer Space Treaty in 1967 and must be followed by anyone in the space industry, governmental or non-governmental entities alike.

Can we be confident that, while pushing the boundaries of human exploration in such a short time frame, corners won’t be cut or standards won’t be allowed to slip? It will be considerably harder to follow these protocols once humans are actually on the planet.

If SpaceX was serious about planetary protection, I would expect to see a policy on its website, or easily found by searching “SpaceX planetary protection”. But that isn’t the case. So while it is possible that it has a rigorous planetary protection plan in place behind the scenes, its public-facing content seems to suggest that pushing the boundaries of human exploration is more important than the consequences of that exploration.

Musk doesn’t seem too worried about contamination. He has eluded to the concept of panspermia, the idea that Mars and Earth have exchanged material or even life in the past due to asteroid impacts anyway. In the recent video above, he also says: “I don’t think some Earth-based bacterium is going to be able to migrate much through Mars” and “if there is any life, it will be very deep underground”. But he simultaneously argues that we can excavate to make room for humans underground on Mars, where they would be shielded from radiation.

Another issue is the health of the humans are being sent out to Mars. Deep space is not without its dangers, but at least working in low Earth orbit, on the moon and the International Space Station, the Earth’s magnetic field offers some protection from harmful space radiation.

Mars doesn’t have its own magnetic field and its atmosphere provides little shelter from cosmic radiation. Astronauts would also be exposed to deep space radiation for the minimum six-month journey between planets.

Though plenty of work is being conducted, radiation protection technology is a long way behind other aspects of rocketry. I’m not sure that it is fair or ethical to expect astronauts to be exposed to dangerous levels of radiation that could leave them with considerable health problems – or worse, imminent death.

Add to that the environmental impact of these missions, which release a lot of carbon dioxide, if they become frequent.

So while there is obviously a lot to gain from sending humans to Mars, the risks of contaminating Mars, injuring astronauts and damaging the environment are very real. I would argue that it is our moral obligation to prevent such damage. I hope SpaceX is putting as much thought into this as it has into its launch vehicles, and I would like to see this become a priority for the company.

Once we have better radiation shielding and have proven that Mars is entirely inhospitable, albeit a very difficult thing to do, it will most likely be an adventure worth embarking on. But at the very least, the company should hold off sending people to Mars until we have the results of the upcoming life detection missions, such as the Mars Sample Return and ExoMars rover.

Until then the moon is a great target for human exploration, resource mining and colonisation. As it is nearby and we can be reasonably confident that it does not harbour life, why not start there?

Regardless of the thrill and feelings of hope this kind of adventure brings, just because we can do something, doesn’t mean we necessarily should, now or in the future.