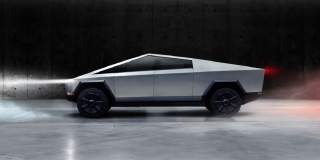 Tesla CEO Elon Musk has been aiming to build an electrically powered truck for nearly a decade, and finally unveiled the Cybertruck last November. Now, Musk is talking about building a domestic factory for that truck.

Musk tweeted Tuesday that he was "scouting locations for Cybertruck Gigafactory," and that the facility would be located somewhere in the "central USA." A subsequent tweet by Musk stated that "Model Y production for east coast too" was being looked at as well. The Model Y is an SUV that Tesla unveiled in the spring of 2019.

Tesla currently operates factories both domestically — including in Fremont, Calif. and Buffalo, N.Y. - as well as in China and Germany.

While Musk's declaration hasn't set off a major bidding war the way Amazon's HQ2 search did, various politicians and chambers of commerce tweeted to make the case that Tesla should choose their city. Last month, Musk tweeted a poll question asking whether Tesla should build a "Giga Texas" factory, with 80 percent of the more than 300,000 respondents answering "Hell yeah" rather than "nope."

A prototype of the Cybertruck, a model that uses a unibody construction that's rare for trucks of its size, was unveiled last November 21 at the Tesla Design Studio in Los Angeles. While the design itself drew some amount of online mockery, as did the moment when Chief of Design  Franz von Holzhausen threw a steel ball and cracked the truck's window, the preorder numbers for the Cybertruck were robust, the company said at the time.

Also in November, Musk tweeted video of the Cybertruck easily defeating a Ford F-150 in a tug-of-war:

Musk got in a bit of trouble back in September of 2018, when he tweeted that he had secured financing in order to take the company private.  This questionable claim led the Securities and Exchange Commission to sue Musk for fraud. Musk settled the charges just days later, agreeing to step down as chairman of Tesla and to pay a $20 million fine (with the company itself fined another $20 million). Musk also agreed to a list of topics for which he would obtain pre-clearance before discussing on Twitter.

Tesla never did go private, and its stock surged as high as $900 a share in February, before dipping again along with the general selloff due to Coronavirus. In early February, Marketwatch described the rise in Tesla's stock as "near-parabolic" and comparable to that of Bitcoin in 2017.