Ending the Korean War Is Much More Than a Symbolic Concession 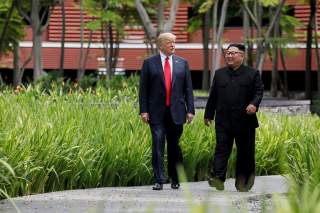 Last month, President Donald Trump asked Secretary of State Mike Pompeo to not go to North Korea as he felt that they were not making sufficient progress on denuclearization. The United States has asked North Korea to begin implementing substantive denuclearization, but North Korea requested that America sign a peace treaty to end the Korean War first. At this time, neither side has made any further concessions to one another (although now there is talk of another Kim-Trump summit). What are the chances of negotiations overcoming this impasse?

Many South Korean people think that the United States should declare an end to the war because North Korea has already made concessions such as repatriating some corpses of U.S. soldiers killed in Korea and dismantling one nuclear facility. Also, North Korea maintained its self-imposed de facto moratorium on nuclear missiles testing announced back in September of 2017. Furthermore, some South Korean people also think that the Republic of Korea (ROK) and America don’t lose anything from the declaration of peace. But North Korea’s concessions are likely a deception because they are trying to obtain political and economic gains while postponing implementation of the denuclearization process. Would signing a peace treaty with North Korea before denuclearization is started be such a bad thing? Policymakers should recognize that Kim Jong-un and North Korea stand to gain three real benefits from a peace treaty that comes before substantive concessions.

First, declaring the end of the war has implications for the United Nations Command (UNC) in South Korea, which North Korea views as a threat. Originally composed of sixteen countries, the UNC has a very symbolic meaning for the south. Although the United States provides the majority of military forces, the United Kingdom, France, and other countries who participated in the Korean War have engaged with the UNC and planned how many soldiers they would dispatch to South Korea if war recurs on the Korean Peninsula. Since 1978, the U.N. has handed over command of Korean and U.S. forces to the ROK-U.S. Combined Forces Command and has been in charge of the armistice agreement only. If the Trump administration declares an end to the war, the UNC’s mandate to remain in South Korea will be lost, forcing Seoul to reevaluate the UN presence within its borders and its broader security situation. Such a result would also be irreversible because the UNC needs approval from the United Nations Security Council (UNSC). Political efforts within the UNSC to reinstate the UNC after its removal would certainly fail as China and Russia would use their veto powers.

Second, ending the Korean War would allow Kim Jong-un to further consolidate his power in North Korea because he will guarantee his regime’s security. According to Thae Yong-ho, a North Korean defector who was the former minister of the North Korean embassy in London, Kim Jong-un told senior officers in the North Korean government, “Our nuclear program is a precious legacy which has come from our ancestors. Without nuclear weapons, we’re dead.” This quote shows that Kim Jong-un does not want to give up his nuclear weapons and will stop efforts to the contrary. That potentially includes North Korea concealing their nuclear capabilities and their technical and scientific capital. This means that Kim Jong-un would likely not make any substantial concessions while attaining a guarantee of their regime safety from America.

Third, ending the war will take away the U.S. justification for deterring North Korea through military force. Previously, America has put military pressure on North Korea to attain policy outcomes. If an end to the war is declared, the United States will lose its justification for exercising its military might in the peninsula, making it more politically costly to engage in military drills with South Korea and to deploy strategic arms in shows of force. This greatly increases the difficulty of deterring North Korea’s military threats, as Pyongyang would retain its robust WMD that could decimate the south or Japan. After a peace treaty was signed, North Korea and many South Koreans would want the U.S. military to leave the Korean peninsula because the justification for its presence was weakened.

Nevertheless, America should keep negotiating with North Korea to maximize its national interests. Yet the United States must be careful so ending the war will not undermine its own security as well as that of its allies. To ensure that North Korea does not hide many ambiguous expressions in the treaty’s clauses to deceive America, Washington should focus on three measures to nullify Pyongyang’s pernicious strategy.

First, Washington needs an insurance clause that would reinstate sanctions and military support for the South if North Korea acts deceitfully. For instance, the United States should seek a comprehensive list of North Korea’s nuclear facilities and the number of the nuclear weapons Pyongyang has before declaring an end to the war. If this happened, it would also fulfill a key initial step towards America’s stated goal of denuclearization. If the U.S later finds out that the North Koreans did not disclose a facility, the declaration of peace should become invalid and punitive measures should be reinstated. If North Korea intends to feign acquiescence to disarmament and peaceful relations, this will effectively punish them for lying. However, if they are being sincere about their intentions, then they have little to worry about. The key point is insuring that America’s willingness to engage is not taken advantage of.

Second, the United States has to understand that North Korea made the summit agreement with Trump very tactfully and skillfully. In the Singapore agreement, Washington overlooked the wording of key sentences, which North Korea is now taking advantage of. Many conservative South Koreans worry about the Singapore agreement because the agreement is written in a way that promotes confidence-building initiatives and ambiguous promises about denuclearization.

For instance, the Singapore statement between Trump and Kim Jong-un states: “The establishment of new U.S.-DPRK relations will contribute to the peace and prosperity of the Korean Peninsula and of the world, and recognizing that mutual confidence building can promote the denuclearization of the Korean Peninsula.” This statement doesn’t include any commitment from North Korea to denuclearize. Rather, the focus is on the establishment of a new relationship and mutual confidence building before North Korea can consider denuclearization. The Singapore agreement was a big win for North Korea because America was already deceived by North Korea’s tricks. So the United States needs to understand North Korea’s intentions by carefully scrutinizing the language North Korea chooses to use. Pyongyang’s word choice is intentional and should not be overlooked.

Third, Washington must clarify what was agreed to in Singapore. In the third sentence of the agreement, it was written that both sides should “promote the denuclearization of the Korean Peninsula”. That the wording was the “Korea Peninsula” and not “North Korea” is telling. This language is intended to require the United States to leave South Korea in exchange for the North’s disarmament, as America is a nuclear weapons state. If the United States refuses to disarm or leave the peninsula, then North Korea has another justification to abolish the agreement that follows the peace treaty and keep its nuclear weapons.

Denuclearizing the Korean Peninsula means that North Korea would ask America to withdraw its forces from South Korea. If the United States opposes that demand, North Korea might say that Washington broke the agreement and refuse to make further progress on denuclearization. If North Korea then withdraws from the agreement after a peace declaration was signed, America and South Korea already did two irreversible concessions—having the UNC dismantled and giving up their justification for military action—so only North Korea would benefit from the process.

America and South Korea must understand what will happen after declaring an end to the Korean War. Both nations should cooperate in preparation before negotiating a peace declaration or peace treaty with North Korea. Judging by public statements from Pyongyang, it is clear that North Korea sees denuclearization as a reciprocal process where it makes concessions in tandem with the United States. If done carefully, all three nations will see improvements in their security environment. However, if done carelessly, the United States and South Korea are the ones that stand to lose.

Sungku Jang is an Asan fellow at The National Interest.