EPA Ignores the Pleas of Farmers on Crop Protection 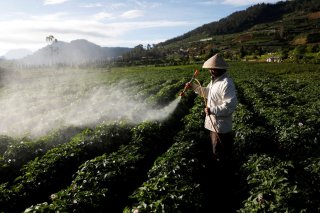 In a move that is causing American farmers significant distress, the Environmental Protection Agency (EPA) is effectively banning the use of the herbicide atrazine.

The agency is lowering the so-called concentration equivalent level of concern (CE-LOC) to 3.4 ppb (parts per billion), making the substance unusable on farms across the country. The agency has thus undone an authorization dating back to 2016, going back to Obama-era rules, and reopening a political battle that implicates courts and regulators to do the strategic bidding for Washington.

Behind the definition of the concentration level of crop protection products and the associated court battles lies the fact that not even agriculture is spared by the partisan approach of lawmakers. Be it atrazine or the controversy surrounding glyphosate—environmental activists aim to phase out any herbicide, fungicide, or insecticide and push for an all-organic farming model. If the motivation for these bans were justified by a genuine concern for consumer health, they could be excused, but they appear to be associated with a manic opposition to modern farming, paired with a sinister belief in conspiracy theories.

Atrazine became popularly known through serial conspiracy peddler Alex Jones, who claimed that it was “turning the frogs gay,” while relying on one non-peer-reviewed and debunked study by a researcher named Tyrone Hayes from twenty years ago. The researcher had falsely claimed that the chemical created hermaphrodite frogs and altered their sexual orientation. Reviews by the EPA, German, and Australian regulators all found no evidence for the “gay frogs” premise. When researchers in Japan replicated Hayes’ experiment, they found no evidence either.

It wasn’t just fringe conspiracy theorists who used Hayes’ paper to claim that dark forces were attempting to kill masculinity by poisoning the drinking water—environmental groups also used the misleading conclusions. Beyond Pesticides, a group arguing for atrazine to be banned, writes: “EPA has long known about triazine’s threats to wildlife, including its ability to chemically castrate male frogs. However, the agency has consistently defended the chemical and sat by while independent researchers like Tyrone Hayes, PhD, who conducted seminal research on atrazine’s endocrine-disrupting properties, are pilloried by chemical industry propaganda.”

For consumers, the case for farmers being able to use adequate crop protection is better than just “this won’t harm you.” In fact, there are good reasons why atrazine, after glyphosate, remains the second most used herbicide in the United States. Consumers save $4.3 to almost $6.2 billion annually because the use of the product lowers prices for dairy products, eggs, and meat.

Atrazine is used on twenty-four million acres of corn, sorghum, and sugarcane (for the first two, the United States is the world’s largest exporter). Without it, corn farmers would lose an estimated $3.1 to $4.6 billion per year, which would increase food insecurity and prices at a time when American consumers can afford it the least. Let’s not forget that compared to Europe, Americans spend a lot less on food: in 2020, Americans spent 5 percent of their disposable income on groceries, compared to 8.7 percent in Ireland (the lowest in the EU), 10.8 percent in Germany, 12 percent in Sweden, 17 percent in Hungary, and 25 percent in Romania.

A ban would also have environmental implications. The use of herbicides reduces the need for diesel-fueled tillage and avoids soil erosion. In practice, this means that less carbon dioxide is released into the atmosphere, and wildlife—such as birds—is less often disturbed by farmers passing over their fields. It also makes the farming system more efficient: all it takes to see that is to compare the American food model with the African, where pesticide availability is low and where farmers lose 40-100 percent of their crops. Herbicides essentially guarantee that we produce more with less and guarantee that we maintain affordable and available food.

The reasoning for the ban is based, just as with the example of Tyrone Hayes, on bad science. In fact, the Science Advisory Panel (SAP) of the EPA has alerted its own administrators to the fact that most of the studies it uses to argue for a ban “have weaknesses in their design” which “render interpreting their results and scoring them for “effects” or “no effect” difficult and subjective.” Why is the EPA not listening to its own scientists?

Farmers have also fired back at the EPA, calling its statements “untrue,” and saying that its new concentration level is “based on shaky scientific evidence derived through a process that has not been transparent.” They continue by arguing that atrazine is essential for carbon sequestration, essentially telling the EPA that its decision will lead to higher carbon dioxide emissions over time.

The EPA isn’t listening to farmers and its own scientific panel. Maybe it will reconsider once consumers feel the effect of a decision that will severely affect food prices.

Bill Wirtz is a Senior Policy Analyst at the Consumer Choice Center.