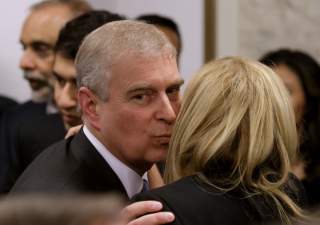 Jeffrey Epstein accuser Virginia Roberts Giuffre detailed the night she allegedly had sex with Prince Andrew in a BBC interview that aired Monday in Britain.

Jeffrey Epstein accuser Virginia Roberts Giuffre gave new details about her time with the alleged child sex trafficker during a BBC interview Monday, including information about her encounter with Prince Andrew.

Giuffre has accused the Duke of York of having sex with her when she was 17 years old, which he has repeatedly denied. She previously said Epstein offered her up to Andrew and gave new details about the night in question in an interview that aired Monday in Britain.

She added that after the nightclub where the two allegedly danced, Ghislaine Maxwell, Epstein’s “madame,” told her in the car that she would have “to do for Andrew what I do for Jeffrey.” Giuffre said this thought “made her sick” and continued on to explain how the night with Andrew went.

“There was a bath and it started there and then led into the bedroom,” Giuffre said, detailing the alleged sex with the prince, according to HuffPost. “It didn’t last very long, the whole entire procedure. It was disgusting. He wasn’t mean or anything but he got up and he said ‘Thanks’ and walked out. I sat there in bed, just horrified and ashamed and felt dirty. I had to get up and have a shower.”

“I had just been abused by a, a member of a royal family,” Giuffre noted, according to CBS News.

Giuffre also repeated the background of her time with Andrew and said they were both at a nightclub before he had sex with her and that the British prince “was sweating all over me.” The Duke of York previously gave an interview to BBC in November where he alleged that a medical condition prevented him from sweating at the time, so he could not have been dancing with Giuffre as she has alleged.

“I mean it was horrible, and this guy was sweating all over me, like his sweat was like, it was raining basically everywhere, I was just like grossed out from it, but I knew I had to keep him happy because that’s what Jeffrey and Ghislaine would have expected from me,” Giuffre said during Monday’s interview.

Andrew denied the allegations against him again amid Giuffre’s new interview.

“It is emphatically denied that The Duke of York had any form of sexual contact or relationship with Virginia Roberts. Any claim to the contrary is false and without foundation,” Buckingham Palace said in a statement Tuesday, CBS News reported. “The Duke deeply sympathises with those affected who want some form of closure. It is his hope that, in time, they will be able to rebuild their lives.”

“The Duke is willing to help any appropriate law enforcement agency with their investigations, if required,” the palace said. “The Duke has already stated that he did not see, witness or suspect any behavior of the sort that subsequently led to Jeffrey Epstein’s arrest and conviction. He deplores the exploitation of any human being and would not condone, participate in, or encourage any such behavior.”

Giuffre has been emphatic that the sex occurred and told BBC she is the one telling the truth and the prince knows it.

“He knows what happened,” Giuffre said, according to TIME. “I know what happened and there’s only one of us telling the truth.”

Andrew alleged in his BBC interview that he did not remember ever meeting Giuffre. However, an email from January 2015 to Maxwell shows otherwise. It emerged among U.S. legal documents and Andrew sent it.

“Let me know when we can talk. Got some specific questions to ask you about Virginia Roberts,” the email reads, according to CBS News.