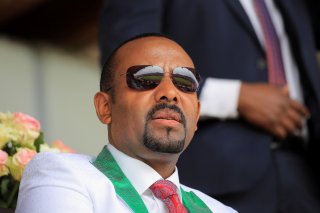 The government of Ethiopia declared a nationwide state of emergency on Tuesday as rebels from the secessionist Tigray region gained ground in the country’s north.

The Ethiopian state-owned Fana Broadcasting outlet announced the state of emergency, attributing it to a decision made by the country’s cabinet. According to the announcement, the state of emergency will last for six months, and allows the government to impose a curfew, set up roadblocks, and order military rule in certain areas. It also expands the government’s legal authority, allowing it to detain Ethiopians suspected of links to “terrorist groups”—understood to mean the Tigrayan People’s Liberation Front, or TPLF—shut down TPLF-friendly media sites, and conscript Ethiopians of military age.

“Our country is facing a grave danger to its existence, sovereignty, and unity,” explained Minister of Justice Gedion Timothewos in a media briefing in Addis Ababa. “We can’t dispel this danger through the usual law enforcement systems and procedures.”

Timothewos suggested that those who violated the government’s instructions during the state of emergency could face penalties of up to ten years’ imprisonment.

The government’s emergency declaration came after TPLF fighters, expanding beyond Tigray, captured the strategically important towns of Dessie and Kombolcha in Amhara, a neighboring province. From there, the rebels threatened that they might push south towards the capital, roughly 250 miles to the southwest.

Although government media reported that Ethiopian forces were still present in or near the two towns, and continued to fight for them, the TPLF’s threat is being taken seriously. On Tuesday, the Ethiopian government took a registry of privately owned weapons in the capital, notifying their owners that they might be required to defend the city from a rebel attack.

The war between the Ethiopian government and the TPLF has continued since November 2020, after what Prime Minister Abiy Ahmed described as a series of guerrilla raids against military positions in Tigray. Following the influx of Ethiopian troops, the capital of Tigray, Mekelle, was occupied, but Ethiopian forces retreated in mid-2021, returning it to rebel control. Fighting has since spread to the neighboring Amhara and Afar provinces. U.S. Special Envoy for the Horn of Africa Jeffrey Feltman condemned the expansion, blaming the TPLF and calling on them to withdraw.

However, Feltman also condemned the Ethiopian government for blocking supplies of humanitarian aid to Tigray, suggesting that that decision had played a role in the TPLF’s choice to expand the war.

The United States also announced on Tuesday that it would end Ethiopia’s trade privileges, which allow the country to export to the United States without paying tariffs.