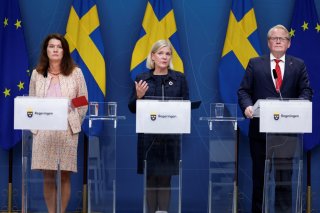 The Nord Stream 1 and 2 pipelines running from Russia to Germany were hit in four places following a series of powerful blasts in late September. The explosions, which occurred in exclusive economic zones belonging to Denmark and Sweden, caused significant leaks that were described by researchers as the single largest recorded discharge of methane. CEO of Russian gas giant Gazprom Alexei Miller told Russian media earlier in October that substantial repair work would be required to restore the pipelines, according to state news outlet TASS. The pipelines are majority-owned by Gazprom.

There was widespread acknowledgment among European officials that the blasts are likely an act of sabotage. “Nordstream sabotage acts appear to be an attempt to further destabilize energy supply to EU. We need an urgent and thorough investigation. Those responsible will be held fully accountable and made to pay,” wrote European Council President Charles Michel shortly following the incident.

Denmark, Sweden, and Germany have launched separate investigations into the Nord Stream explosions. It was reported earlier this month that Sweden ruled out establishing a joint investigation team with Denmark and Germany, citing the sensitivity of information stemming from the probe. Investigators have confirmed that the blasts were deliberate acts of sabotage, yet the three inquiries have so far yielded no details on the most important question: the identity and motives of the perpetrator.

The Kremlin, which previously blamed the attack on the United States and its allies, complained that it is being denied access to the investigations. “As for possible perpetrators, our considerations and our preliminary assumptions are well known. We cannot get any new data at the moment, because we are denied the opportunity to participate in the investigation of this sabotage,” Kremlin spokesman Dmitry Peskov told reporters earlier this month. Peskov said Russia does not have the authority to conduct its own investigation at the site of the leaks. Russia’s Foreign Ministry announced in a statement it will not recognize the “pseudo-results” of Western investigations into the Nord Stream incident if Moscow is not allowed to take part in them.

Some Western experts and officials have speculated that Russia may have struck the pipelines as an act of intimidation. “(Russia) can intimidate Europeans through an act of sabotage. Because if they're able to blow up these pipelines in the Baltic seabed, they could do that as well to the new pipeline,” said Kristine Berzina, senior fellow for security and defense at the German Marshall Fund, according to Reuters. Russia has dismissed all such allegations, insisting it has no reason to target its own pipelines. “Are we interested in that? No, we are not, we have lost a route for gas supplies to Europe,” Peskov said in a conference call with reporters, according to Reuters.