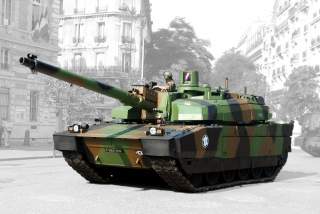 What happens when German and French tanks mate?

It sounds like a punchline to a dark joke, given the past history between France and German panzers. But in fact, French and German manufacturers have allied to produce a prototype for what could be a pan-European tank.

The European Main Battle Tank, or EMBT, combines the chassis of Germany’s Leopard 2A7 tank with the turret of France’s Leclerc. It’s the handiwork of the KNDS Group, a joint venture between Germany’s KMW, which manufactures the Leopard, and France’s Nexter Defense Systems, which makes the Leclerc.

The EMBT was recently unveiled at the Eurosatory defense show in Paris. The vehicle is billed as a technology demonstrator to prove that France and Germany can work together on joint defense projects.

Because the EMBT was put together from the components of existing vehicles, the prototype was finished less than three years after KNDS was formed.

“The hull, engine and entire chassis comes from the Leopard 2A7 and were modified to host the compact and light turret with automatic loading from the Leclerc,” said a KNDS press release.

“Composed of proven and tested technologies, the EMBT is a short-term response to the operational need of the market for high-intensity battle tanks.”

In particular, KNDS cited the combination of a Leopard chassis that can accommodate up to about sixty-eight tons of weight, and a lightweight Leclerc turret operated by only two crew members, rather than the usual three. The lighter turret leaves about 6 tons of extra weight capacity that customers can use to additional equipment.

The chassis and turret “were integrated at Nexter’s facility at Roanne [central France], where Leclerc production was originally undertaken,” according to Jane’s 360.

“Since then, the EMBT has undertaken mobility and firing trials, the latter performed in Portugal, with 22 rounds fired from the 120mm smoothbore gun.”

Italy has expressed interest in purchasing the EMBT, according to French media [Google translation here]. Italy operates two hundred C1 Ariete tanks, a fifty-four-ton vehicle first deployed in 1995. But many of the vehicles are out of service due to lack of funding for maintenance, and the Italian government has proposed developing a prototype of an upgraded Ariete.

More important, while the Leopard-Leclerc hybrid is just a demonstration project, it does position KNDS as a contender for the next European tank. France and Germany have teamed up for the Main Ground Combat System, which will replace the Leopard 2 and Leclerc around 2035. But that date “could well be brought forward because the design of these two MBTs is now many years old and the point will be reached where they can no longer be upgraded,” notes Janes.

France and Germany are also working on the Common Indirect Fire System, a self-propelled artillery piece that will replace the German PzH2000, a tracked 155-millimeter howitzer, and the French CAESAR, a wheeled 155-millimeter piece.

The larger context to these Franco-German projects is common European defense. The EBMT comes at a time when Russia is becoming more aggressive and states such as Iran have emerged as potential threats to European interests.

Meanwhile, the Trump administration has indicated that Europeans need to spend more on defense, and that America is stepping back from its role as as father-protector of the Atlantic alliance system. In addition, Brexit may shake up the defense links between Continental Europe and Britain, the most militarily active of the European NATO countries.

Last week, nine EU states agreed to form a joint military intervention force, including France, Germany, Belgium, Denmark, the Netherlands, Estonia, Spain, Portugal and even Britain. While the rapid deployment force has raised fears that it will weaken NATO, it also raises the question of whether military integration—even on a small scale—will lead to joint defense procurement.

There have been several successful projects developed by European states working together, including the Tornado and Eurofighter aircraft.