Even a Bulletproof Vest Won't Save You: Russia's New Assault Rifle Packs a Punch 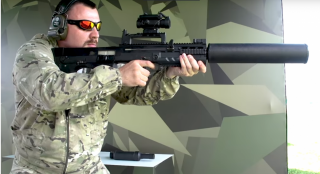