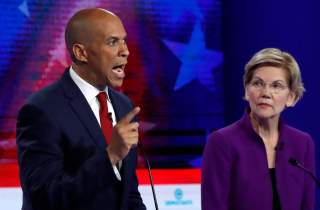 Key point: Booker still wants to tax the rich, but in a different way.

In last night’s Democratic presidential debate Senator Cory Booker (D-NJ) went after Senator Elizabeth Warren’s (D-MA) wealth tax proposal. He contended, “But the tax the way we’re putting it forward right now, the wealth tax, I’m sorry, it’s cumbersome. It’s been tried by other nations. It’s hard to evaluate. We can get the same amount of revenue through just taxation.” Instead, Booker prefers other methods to tax the wealthy. One of his proposals, mark-to-market taxation of capital gains, isn’t all that different than a wealth tax in some respects.

Cory Booker proposes to increase taxes on the wealthy by increasing the tax rate on capital gains to be equal to ordinary income (from 20 percent to 39.6 percent) and move to what’s called a “mark-to-market,” or an accrual based regime. Under this system, capital gains (the profit earned by selling an asset) would no longer be taxed at the time of sale. Rather, capital gains would be taxed every single year as it changes value. This change would raise taxes on the wealthy by eliminating deferral and taxing some capital gains that completely escape taxation due to the ability to step up basis at death.

A wealth tax, in contrast, is an annual tax on the net worth of a taxpayer. A few Democratic presidential candidates have proposed this, Elizabeth Warren being the most prominent. Under her proposal, high net worth individuals would be subject to a 2 percent per year tax on assets over $50 million and a 6 percent annual tax on assets over $1 billion.

And while Booker did critique Warren’s wealth tax for being cumbersome, a mark-to-market income tax may suffer from similar challenges. A big challenge with a wealth tax is valuing assets that do not have readily known market prices. Closely held businesses, for example, are hard to value because they are not traded in the open market like corporate stock. A mark-to-market tax also requires valuing assets each year in order to measure their change in net worth. However, valuation problems are likely easier to address with a mark-to-market system as the tax could be applied retrospectively on hard-to-value assets.

Ultimately, a mark-to-market tax regime for capital assets is probably more feasible. One of the most significant roadblocks to a wealth tax, besides political feasibility, is the question of whether it is constitutional. Mark-to-market also taxes “lucky” investors more than a wealth tax, which lightly taxes prospective rents. This isn’t to say that a mark-to-market system is without its downsides. It would increase the effective tax burden on saving, which could reduce national saving and national income. And Booker’s proposal to limit mark-to-market treatment to a certain group of taxpayers introduces administrative challenges of its own.

The Democratic nominees will continue to critique each other’s tax plans, but ultimately many of the ideas are similar ways to get to the same place.

Kyle Pomerleau is a Resident Fellow at AEI.