Even If The U.S. Military Wins A War With Iran, America Still Loses 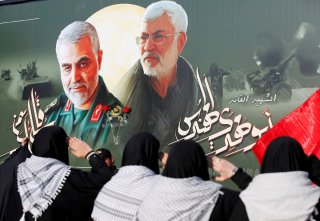 Here's What You Need To Know: Iran has ties to militias in Iraq, Syria and Afghanistan, Omar Lamrani, an analyst at the military intelligence firm Stratfor, told Pearl. A U.S.-Iran war "can become very messy very very quickly, and spread the conflict across the world."

U.S. president Donald Trump on Jan. 2, 2020 ordered the killing of Maj. Gen. Qassem Soleimani, the head of Iran’s Revolutionary Guard Corps militia and one of the country’s top military leaders.

War could result. And it almost certainly would be catastrophic for everyone.

Against the backdrop of mass demonstrations in the aftermath of the attack, Soleimani’s successor vowed to retaliate. In return, Trump threatened to order U.S. forces to bombard 52 Iranian targets including cultural sites. U.S. law forbids military attacks on such locations.

The Pentagon in the days after the killing rushed 3,000 additional Army troops plus a Navy amphibious ready group to the Middle East. The Eurasia Group in New York City estimated the chance of “a limited or major military confrontation” at 40 percent.

“The best-case scenario is that Trump’s bluster and Iran’s weakness translate into no retaliation serious enough for Trump to lose his temper again,” Daniel Drezner, a professor of international politics at Tufts University, wrote in The Washington Post. “The worst-case scenario is the repeated misinterpretation by U.S. and Iranian policymakers of the other side’s red lines.”

Any eventual clash likely would be “asymmetric,” BBC correspondent Jonathan Marcus wrote. “This term suggests a war of the weak against the strong -- two sides with very different goals and very different metrics for success.”

If a war does break out the U.S. will seek to pummel Iran's armed forces. It would probably go about it in its time-honoured fashion; initially taking down Iranian air defenses and so on. But the Iranians simply need to do enough damage to turn U.S. public opinion against the conflict -- to make it appear open-ended and uncertain.

Iran, if under sufficient pressure, might also seek to spread the conflict more broadly, urging its proxies in Iraq, Syria or elsewhere to attack U.S. targets. In extremis it might even try to prevail upon Hezbollah (in concert with its own forces in Syria) to launch rocket attacks on Israel. The goal would be to demonstrate to Washington that what Mr. Trump might see as a short-punitive campaign actually risks setting the region on fire.

Iran has plenty of options for sidestepping American military advantages and striking at weaknesses in U.S. infrastructure. “Iranian forces could bomb an American oil tanker traveling through the Strait of Hormuz, a vital waterway for the global energy trade aggressively patrolled by Tehran’s forces, causing loss of life or a catastrophic oil spill,” Alex Ward noted at Vox. “The country’s skillful hackers could launch a major cyberattack on regional allies like Saudi Arabia or the United Arab Emirates.”

If Tehran chose to continue escalating, it could target American troops and diplomats in Iraq, Ward continued. Anticipating this, the Pentagon has halted Iraq-based counterterrorism operations targeting Islamic State militants and has shifted its troops in the country to a defensive posture. The Defense Department has signalled it might soon withdraw all U.S. forces from Iraq.

Trump’s options at that point would be “extremely problematic,” Ward explained.

The riskiest one — by far — would be to invade Iran. The logistics alone boggle the mind, and any attempt to try it would be seen from miles away. “There’s no surprise invasion of Iran,” Brewer, who is now at the Center for Strategic and International Studies think tank in Washington, told me.

Iran has nearly three times the amount of people Iraq did in 2003, when the war began, and is about three and a half times as big. In fact, it’s the world’s 17th-largest country, with territory greater than France, Germany, The Netherlands, Belgium, Spain and Portugal combined.

The geography is also treacherous. It has small mountain ranges along some of its borders. Entering from the Afghanistan side in the east would mean traversing two deserts. Trying to get in from the west could also prove difficult even with Turkey — a NATO ally — as a bordering nation. After all, Ankara wouldn’t let the U.S. use Turkey to invade Iraq, and its relations with Washington have only soured since.

The U.S. could try to enter Iran the way Saddam Hussein did during the Iran-Iraq war, near a water pass bordering Iran’s southwest. But it’s swampy — the Tigris and Euphrates rivers meet there — and relatively easy to protect. Plus, an invading force would run up against the Zagros Mountains after passing through, just like Saddam’s forces did.

Experts Ward cited estimated Trump would need to deploy 1.6 million troops in order to successfully capture Tehran. That figure amounts to the entire active-duty U.S. military plus several hundred thousand reserve troops. In other words, more troops than the Pentagon realistically can muster.

The next logical step, if Trump indeed ordered an invasion of Iran, would be for the Defense Department to massively expand its force structure. Americans instinctively know this. The day after Soleimani’s assassination, a surge in visits to the Selective Service -- the agency that administers the U.S. military draft -- “experienced technical difficulties as people flooded the site,” The Washington Post reported.

“And there’s the human cost,” Ward continued. “A U.S.-Iran war would likely lead to thousands or hundreds of thousands of dead. Trying to forcibly remove the country’s leadership, experts say, might drive that total into the millions.”

And the war probably would spread, Mike Pearl explained at Vice. “Let's not forget that Iran has its terror-sponsoring fingers in a whole lot of geopolitical pies,” Pearl wrote.

“Iran's moderate president, Hasan Rouhani, might advocate for diplomacy, but if the Supreme Ayatollah disagrees, Rouhani doesn't get any say in the matter. Nor does Rouhani control Iran's powerful Revolutionary Guard Corps—and they're the ones tied to Hezbollah and the Houthis in Yemen.”

Iran has ties to militias in Iraq, Syria and Afghanistan, Omar Lamrani, an analyst at the military intelligence firm Stratfor, told Pearl. A U.S.-Iran war "can become very messy very very quickly, and spread the conflict across the world," Lamrani said.