Even with Upgrades, Chinese J-15 are No Match for American Fighters 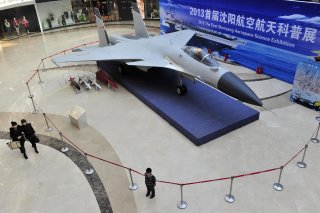 A Chinese government-backed newspaper, citing Chinese website eastday.com, has reported that the People’s Liberation Army Navy has upgraded its carrier-launched J-15 fighter. The J-15 has a new wing configuration, wingtip missile pylons, radar, and an infrared search and track system.

The upgrades do not seem especially remarkable, however. There is little information available about the sophistication of the new infrared system, but it is unlikely to match the F/A-18’s recently-integrated infrared search and track targeting system. The Super Hornet system introduced advanced infrared targeting technology designed to function effectively in a spectrum-challenged environment. That would be critical in any environment involving electronic warfare.

The J-15’s new radar may be more impactful, however. The Global Times says that the J-15’s upgraded radar “could have switched to an advanced, active electronically scanned array (AESA) radar system which enables the use of China's most advanced PL-15 beyond-visual-range air-to-air missile.”

The new wingtips also allow the jet to fire a more lethal PL-10 short-range combat missile. The PL-10 is characterized as “much deadlier” than the PL-8 that preceded it.

However, all of these upgrades may not even come close to those already built into the F-15EX. The new American fighter is built with advanced pylons, high-speed computing, AESA radar, and next-generation targeting systems.

China is also likely to operate at a substantial deficit when projecting naval airpower from its aircraft carriers. At best, an upgraded Chinese J-15 might rival an American carrier-launched F/A-18 Super Hornet. However, the J-15 is still a fourth-generation aircraft, likely unable to compete with a U.S. carrier-launched F-35C or F-35B.

China is building aircraft carriers at a rapid pace and boasts one of the world’s largest fleets, but its ability to project power at sea cannot rival the U.S. Navy’s eleven aircraft carriers. In any kind of maritime conflict, Chinese carriers equipped with an upgraded J-15 would likely have trouble establishing air supremacy when pitted against F-35s at sea.

While the upgraded J-15 may have a smoother configuration and slightly stealthier characteristics, the aircraft is not likely to do well against the most modern air defenses.