Ever Wanted to Ride in an AH-1F Cobra Helicopter and Fire Its Guns? Now Is Your Chance. 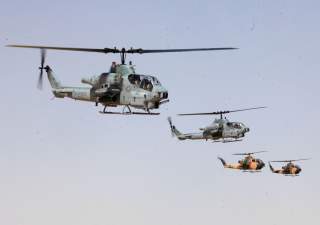 Riders will be treated to a rare opportunity to view and interact with a combat aircraft and the veterans who served with such machines.

The Army Aviation Heritage Foundation (AAHF) will be offering rides on the AH-1F Cobra attack helicopter in several Southern California locations this summer.

The Detachment is based at the world-famous Yanks Museum located at the Chino, California Airport.

According Verticalmag.com, in addition to conducting flight operations from that location on Jul. 14 and 28, Aug. 8, and Sept. 8 and 22, the Detachment will be bringing the Cobra to several aviation-related locations and events. These include the Steve McQueen Car Show in Chino Hills on Jun. 2; the Western Museum of Flight in Torrance on Jun. 16; and the Wings Over Camarillo air show on Aug. 17, 18 and 19.

The cost for each ride is either $325 or $525. Each person will get to sit in the gunner’s position on a simulated “fire mission.”

The AAHF is a unique organization composed of veterans and their supporters that seeks to connect veterans of the Vietnam War and the Cold War with the American public. Its goal is to present the contribution of U.S. Army Aviation through interaction with its members while providing the public with the opportunity to ride in an Army helicopter.

Riders will be treated to a rare opportunity to view and interact with a combat aircraft and the veterans who served with such machines. All of the current members of the So Cal Detachment are combat veterans of the Vietnam War or the more recent conflicts in which the U.S. has engaged.

The Bell AH-1 Cobra is a two-blade, single-engine attack helicopter manufactured by Bell Helicopter. It was developed using the engine, transmission and rotor system of the Bell UH-1 Iroquois. A member of the prolific Huey family, the AH-1 is also referred to as the HueyCobra or Snake.

The AH-1 was the backbone of the U.S. Army’s attack helicopter fleet, but has been replaced by the AH-64 Apache in Army service. Upgraded versions continue to fly with the militaries of several other nations. The AH-1 twin-engine versions remain in service with United States Marine Corps (USMC) as the service’s primary attack helicopter.