Every Ship a Minesweeper. The U.S. Navy Has a Plan to Beat Mines 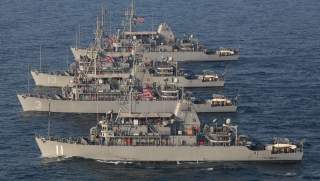 After years of delays and confusion, the U.S. Navy finally has settled on a strategy for replacing its aging, wooden-hull mine-warfare ships. Other facets of the mine-warfare mission remain in flux.

A mix of Littoral Combat Ships and airmobile drone units soon should start replacing the fleet’s 11 Avenger-class minesweepers, which entered service beginning in the late 1980s.

The Navy plans permanently to install minehunting systems, including underwater drones, on 15 new Littoral Combat Ships. But the fleet also wants to hold on to, and even expand, an interim minesweeping capability that it developed amid delays with the LCSs.

The interim Expeditionary Mine Countermeasures Companies combine undersea drones, small boats and divers in single units. The six ExMCM companies, each with scores of people and around a dozen underwater drones, can fly anywhere in the world in 48 hours and embark on any large vessel, transforming the ship into a de facto minesweeper.

During a March 2019 exercise off the Virginia coast, a Royal Navy Bay-class auxiliary ship embarked U.S. Navy sailors, helicopters, boats and drones as part of a test of this so-called "vessel-of-opportunity" approach to mine warfare.

The vessel of opportunity houses the mine-countermeasures company and deploys it near a potential minefield. Boat crews haul the drones out to sea. The drones hunt for mines. The divers then disable or retrieve the mines for study.

The companies have proved to be very good at their jobs. “ExMCM was meant to be a bridging solution,” Capt. Chris Merwin, the director for mine warfare at the Naval Surface and Mine Warfighting Development Center, said at a recent industry event. “Turned out to be a very viable, capable system that we’ve now decided is going to be an enduring system.”

The ExMCM companies currently deploy only to the 5th Fleet area of operations in the Persian Gulf, reinforcing four Avengers that sail from Bahrain.

The 1,300-ton-displacement Avengers reportedly are unreliable and rarely leave port. “The companies that used to make a variety of spare parts no longer exist,” ProPublica reported. “A sailor recently aboard one ship said the sonar meant to detect mines was so imprecise that in training exercises it flagged dishwashers, crab traps and cars on the ocean floor as potential bombs.”

The Navy has been so pleased with the ExMCM companies that Merwin said he’s considering spending part of his $4-billion mine-warfare portfolio adding companies for the 7th Fleet and 6th Fleet, respectively in the Pacific and Atlantic regions.

The fleet in the meantime is preparing to decommission, sometime in 2020, three Avengers that are based in the United States for training. Four each minehunters will remain in Bahrain and Japan for a few more years as the Navy continues installing minehunting systems on 15 LCSs.

The Navy actually bought 24 LCS-compatible minehunting kits, each with its own drones. Converting just 15 LCSs into minesweepers leaves sets of drones that the fleet could use to expand the ExMCM force.

The LCSs’ mine-warfare loadout still is in flux. Unhappy with the performance of some of its underwater drones, the Navy is embarking drone boats on the LCSs in place of the undersea ‘bots. The robot boats would haul sonars that could detect mines.

In addition to drones, the LCSs could embark MH-60S helicopters carrying laser sensors that can scan the sea for the telltale shape of underwater mines. The MH-60s partially replace the Navy’s 27 MH-53E heavy minesweeping helicopters.

The powerful MH-53Es with their three engines haul ocean-skimming sleds that carry sonars for detecting mines. But the MH-53Es are old and unreliable. And their low- and slow-flying mission profile is risky and has resulted in one of the highest crash rates of any military aircraft community.

The MH-60 is more reliable than the MH-53E is but cannot haul a sled like the MH-53E can do, making the former a less effective minesweeper. While the Navy is happy with its minehunting companies and getting closer to being satisfied with the LCS as a mine-warfare vessel, the aerial component of the minesweeping missions continues to be a problem.

“We simply do not have the assets in the pipeline to do what we’re doing right now,” Capt. Mark Leavitt, commander of the Navy’s East Coast MH-53Es, told National Defense.