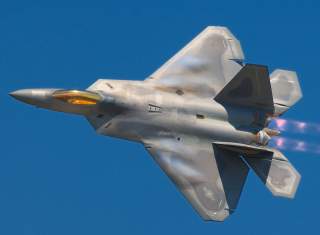 Noteworthy the F-22 is designed around its internal bays, which are essential for the aircraft stealthy design.

Taken on May 20-21 by Teddy Techer, an aviation expert and a reader of The Aviation Geek Club during Wings Over Wayne Air Show at Seymour Johnson Air Force Base (AFB), the cool photo in this post gives us the chance to admire an F-22 Raptor performing a fly-by with its weapon bays doors open.

Noteworthy the F-22 is designed around its internal bays, which are essential for the aircraft stealthy design.

Actually, as reported by GlobalSecurity.org, several issues were encountered during the development of the weapon bays. For instance the limited space drove the configuration of the launchers and acoustic suppression devices. Moreover the Raptor’s ability to launch its weapons at roll rates up to 100 degrees per second has been a groundbreaking requirement made even tougher by tight clearances and flow fields that result from internal carriage.

The typical F-22’s combat configuration is “clean”, that is, with all armament carried internally and with no external stores. This configuration is an important factor not only because maintaining the F-22’s stealth characteristics allows the Raptor to fly and fight undetected by enemy radars, but also because it improves the fighter’s aerodynamics by dramatically reducing drag, which, in turn, improves the F-22’s range.

Nevertheless the Raptor features four under wing hard-points, each capable of carrying 5,000 pounds.