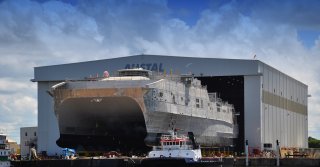 Once a beachhead is secured through an amphibious attack, for example, arriving forces will need reinforcements to achieve mission objectives. These ships also help sea-basing objectives by enabling transport from the ocean, removing the need for land deployments in high-risk, difficult-to-reach areas. Larger, deeper-draft ships will be able to operate at much safer distances, while EPFs approach enemy areas as smaller, faster, and less vulnerable targets.

While operating at sea, attacking forces can be better safeguarded and supported by airpower. Big-deck amphibious ships or aircraft carriers could be positioned to support advancing attack forces moving on land if platforms such as F-35 Lightning II fighter jets, V-22 Osprey tiltrotor aircraft, or F/A-18 Super Hornets have targeting and logistics support from the shore.

Special Operations Forces also often need to move quickly in smaller groups. However, they may also need supplies, weapons, equipment, and even platforms such as fast-moving tactical vehicles. The EPF may be able to support these operations, either by offloading men and equipment directly or launching rigid hull inflatable boats.

An Osprey launched from an amphibious ship or offshore base may deploy Marines behind enemy lines to gather intelligence, support friendly troops, or launch covert attacks. A nearby EPF could reinforce those troops after they deploy by quickly providing additional men or equipment.