Expert Q&A: Why a Hypersonic Vehicle Flight Test Ban Is Not a Good Idea 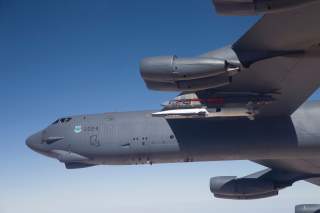 Hypersonic Vehicle (HV) development has been pursued since the late 1950s. These vehicles could significantly cut the cost of accessing space, lessen flight time anywhere on the planet to two to three hours, and be used as weapons that would be extremely difficult to intercept. Although considerable progress has been made, hypersonic flight remains in the development and testing phase.

Recently, concerns have been raised about continued HV flight tests and development because of a HV’s speed, which limits time for decision making by the military, which could increase crisis instability. A HV flight test ban has been proposed because of flight testing’s vital role in aerospace programs, and it would be all but impossible to develop any HVs, including civilian HVs, without flight testing.

Additionally, HVs are seen as destabilizing because of potential ambiguities with the HV itself. For example, since it is believed that China aims to arm its hypersonic weapons with nuclear warheads (as opposed to the United States, which has repeatedly stated that its hypersonic program is for conventional weapons only), any hypersonic weapon from Chinese forces could be assumed to be nuclear by U.S. forces, thereby potentially triggering an appropriate response by the United States.

Why do we flight test in the first place?

Flight testing is vital to any aerospace program. Consider these six reasons why flight tests are conducted:

Can’t flight testing be replaced by ground tests, and modeling and simulation?

Many attempts have been made to reduce/eliminate the need for flight testing because of the high costs, yet no comprehensive alternative methods presently exist.  Currently, no ground-test facility can fully replicate and test all facets of hypersonic flight, which would require simultaneously controlling flow duration, altitude, Reynolds number, gas chemistry effects, velocity, Mach number, model surface temperatures, ablation effects, and the quality of the free stream flow.

Computer simulations have advanced greatly, but the hypersonic flow environment is still not well understood. Producing data to address requirements with a reasonable level of confidence via modeling and simulation is arguably still beyond current capabilities.

Modeling/simulation, component/subsystem-level testing, environments testing, and other techniques can be used to test parts of an aerospace system and give evidence that a HV will perform as designed. But none of these can completely reproduce the information gathered with a flight test. Currently, flight tests are the only way to provide all the realistic combined environments. Ultimately, a flight test must be performed to validate that the major subsystems in the HV, and the HV as an integrated system, perform as expected.

What would be the consequences of a HV flight test ban?

If HV flight testing were banned today, multiple technical and programmatic consequences would result. First, future civilian HVs technology development will use research/development and testing that is performed today on military HVs as a starting point. Consequently, a flight test ban would essentially freeze today’s technology while also locking in the current HV technology leader(s). This could leave nations desiring to advance their HV technology to cheat the ban. Also, a nation whose adversaries possess HVs is unlikely to join a flight test ban and may instead begin or continue their own programs. Since technology being developed for civilian hypersonic airplanes, space transporters, and other vehicles is inherently dual-use and can be repurposed for military applications, a country could cheat on a ban by testing military technology under the guise of a civilian test.

Second, although discouraging military development of HVs is obviously the goal of those calling for a hypersonic flight ban, banning flight tests would discourage potential future entrants from developing civilian HV technology. This would leave the technology in the hands of a small group of nations, precluding potential new solutions from others to be developed. The ban would likely discourage those outside of the group from any further investment in commercial HV development because developers would be unable to test their systems. The economic and/or security implications of access to HVs might also persuade a nation to push for a flight test ban simply to prevent a rival from acquiring/advancing similar technologies.

Finally, HV development would be all but impossible without flight tests because significant environmental and technical uncertainties remain, creating safety and reliability issues. As of today, HV technological advancements are needed in four critical areas—propulsion; aerodynamics; guidance, navigation, and control; and thermal management—and all would be affected if HV flight tests were banned.

Breakthroughs in any given technology field do not always originate with the research leaders, often coming from new entrants who bring a different perspective. Just as companies can come to dominate industries by introducing innovative technologies (e.g., Ford’s moving assembly line, Intel’s computer processors, Apple’s iPhone), nations with small hypersonic programs could make significant breakthroughs allowing them to vault ahead of other nations in the race to develop HVs.

What about a much narrower ban that explicitly defines what a military HV is/isn’t?

A narrow, military HV flight test ban would at best slow down military HV development and be difficult to enforce. A test ban also will not affect those who either do not sign on or cheat it altogether. Because of its dual-use nature, one can imagine a scenario where a civilian airliner is repurposed as a military transporter/cargo plane.

The military HV technology being developed today will pave the way for tomorrow’s civilian HVs. Short-term political and stability gains may be had in banning HV flight testing, but it would come at the expense of long-term benefits. Because military HVs are considered a stepping stone to civilian HVs, a complete hypersonic vehicle flight test ban would hamper development of civilian HV technology in the United States for years to come.

What would be gained by a HV flight test ban?

Abel Olguin is a Mechanical Engineer at Sandia National Laboratories, Advanced Concepts and Mission Payloads Department. The views expressed here are his own and do not reflect the official position or views of Sandia.