An Expert Told Us What Draws People to Socialism 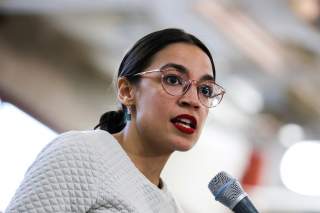 Jordan Peterson spoke at a Heritage Foundation event in New York City. We discussed the rise of socialism in America, the importance of personal responsibility, and why his message is resonating with so many people. Peterson is a professor of psychology at the University of Toronto, a clinical psychologist, and author of the book “12 Rules for Life.” A lightly edited transcript is below:

Genevieve Wood: People are interested in what you have to say.

Jordan Peterson: It seems that way, somewhat of a shock.

Wood: Or maybe it’s because you aren’t a politician, you are a psychologist and you understand more about what’s going on in the world than many of our lawmakers actually do.

I know we’ve got so many ways that we could go with this interview tonight. We have questions, thank you to all of you in the audience who sent in your questions. I’ve got some of them right here, and we’re going to get into those. But … let’s just start with the socialism piece. Do you think Americans truly understand the history of socialism, and actually what it is?

… You speak to, not just college campuses, you’ve been to events around the world. I think 250,000 people you’ve spoken in front of.

Peterson: People are unbelievably ignorant about history. I would include myself in that. I know what I know about history, say, proceeding the 20th century is very sketchy. It’s embarrassingly sketchy.

What young people know about 20th century history is nonexistent, especially about the history of the radical left. I mean, how would they know? They’re never taught anything about it, so why would they be concerned about it?

And then, for many of the people in the audience, you’re old enough so that the fall of the Berlin Wall was part of your life. That was really the end of the Second World War … and it was very meaningful. But that’s a long time ago. There’s been a lot of people born since then, and it’s ancient history.

We don’t have that many good bad examples left. There’s North Korea, there’s Venezuela, but we’re not locked tooth and nail in … in a proxy war and a cold war with the Soviet Union.

It’s easy to understand why people are emotionally drawn to the ideals of socialism, let’s say the left, because it draws its fundamental motivational source from a primary compassion. That is always there in human beings, and so that proclivity for sensitivity to that political message will never go away. It’s important to understand that. You have to give the devil his due, unfortunately.

Wood: You’ve also said that people aren’t as resentful at the success of others as we might think. And I think as you watched a lot of people being interviewed today and you watched some of the students being interviewed, … you hear people talking a lot about inequality, but you say they really aren’t as resentful as we might think as long as they don’t think the game is fixed.

Peterson: Yes, that’s certainly the case. First of all, if you look at the psychological literature to the degree that it’s accurate, which is difficult to ascertain often, people report far more prejudice against their group than against themselves. That’s quite an interesting phenomenon, as far as I’m concerned.

There’s a tendency for people to exaggerate the degree to which the group they belong to is currently suffering from generalized oppression. They’ve been relatively free of it themselves.

Look at how people respond to sports heroes. … No one goes to a sports event and boos the star, even though he or she is paid much better and attracts the lion’s share of the attention, hopefully not in a narcissistic manner. People can celebrate success, but they do have to believe that the game is fair. And the game needs to be fair because otherwise the hierarchy becomes tyrannical.

The problem with the radical left is that it assumes that all hierarchies are tyrannical, and it makes no distinction between them. And that’s an absolute catastrophe because there’s plenty of sins on the conscience of the West as a civilization. But we can’t throw the baby out with the bathwater, and there are far worse places. … People also don’t understand that, and they also don’t understand this is something that’s of particular importance.

They also don’t understand … the knowledge of how rapidly we’re making economic improvements around the world, in the developing world, for example, how fast that’s happening. That is not well distributed knowledge, that between the year 2000 and the year 2012, the rate of absolute poverty in the world fell by 50%.

Now, it’s a U.N. figure. One dollar and 90 cents a day, that was their cutoff for absolute poverty. So, the cynics have said, “Well, that’s a pretty low barrier. It’s not such an achievement to obtain that.” I can tell you it’s an achievement to obtain that if you were living on less than $1.90 day to begin with. But if you look at, if you double the amount to $3.80, or you double it again to $7.60, you find the same pattern.

The poor in the world are getting rich at a rate that is absolutely unparalleled in all of human history. I think a large part of that is happening in Africa. By the way, here’s another lovely piece of news, the child mortality rate in Africa is now the same as it was in Europe in 1952. That’s an absolute miracle. It’s insane that that’s not front-page news, right? That within a lifetime. And the fastest-growing economies in the world are also there.

Wood: But, as you’re saying, why isn’t it front-page news? And when you’re considering social media, and how fast news, and photos, and all that can travel, and that young people are aficionados of all this technology, why don’t they know these things? Or why aren’t they computing what they see as being progress?

Peterson: I think part of it is that things are changing so fast that none of us can keep up. It’s hard to keep the story updated. I had no idea, for example, that most of the world’s economic news and even a substantial proportion of its ecological news was positive until I started to work on a U.N. committee about five years ago on sustainable economic development.

I read very widely, economically, and also ecologically and realized that things were way better than I had any sense of. That these improvements had come at a tremendous rate. But you see partly, it is just that it’s so new that we don’t know and we don’t have a story about it.

And who would be driving the communication of such things? Especially given two other things. One is that human beings are tilted toward negative emotion in terms of its potency. For example, people … are much less happy to lose $5 than they are happy to gain $5. We’re loss averse. We’re more sensitive to negative emotion than we are to positive emotion, and there’s a reason for that.

The reason is, you can only be so happy but you can be dead and right. And I mean dead, that’s not good. And there can be a lot of misery on the way to that end, so we’re tilted to protect ourselves and that makes us more interested, in some sense, and more easily captivated by the negative than by the positive. That’s a hard bias to fight.

And then when you also take into account … and I think this is something that worth seriously considering because the other thing we don’t understand is the technological revolution that’s occurring in every form of media. No one understands it. But one of the consequences is that the mainstream media, so to speak, is increasingly desperate for attention. They exist in a shrinking market with shrinking margins, all of the leading newspapers and magazines are feeling the pinch. Television is dead because YouTube has everything the television has, and then an incredible array of additional features.

And radio is being replaced by podcasts, so it’s a very unstable time for the mainstream media and what would you expect them to do except to do whatever they can to attract attention in whatever manner they can manage?