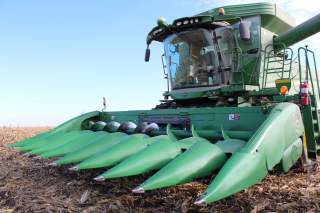 Some trade experts, farmers and Main Street business owners agree that the U.S.-China trade war has hurt trade and jobs across the country.

Nearly half the cargo that travels through the Port of Los Angeles, the busiest port complex in the U.S., is subject to tariffs, which puts about 1.47 million jobs at risk of reduced hours or layoffs on a national level, a study by the Port of LA and BTS Associates released Tuesday found.

“The impact of consumers is real. Prices in certain segments have gone up,” Port of LA Executive Director Gene Seroka told the Daily Caller News Foundation. “The impact to companies that employ all of us in this country and aspire to hire more people are being stunted because of these tariffs. They’re absorbing additional costs. They’re holding cash back waiting for some level of certainty to invest.”

Tariffs may not be the most effective way for the world to hold China accountable for intellectual property (IP) theft, currency manipulation, cyberattacks, producing and selling opioids to the U.S., subsidized state-owned enterprises and more, but bringing complaints to the World Trade Organization (WTO) could be a good place to start, Seroka said.

Today, #PortofLA released a new study on the impact of tariffs nationwide: “By The Numbers: Jeopardizing the National Benefits of Trade Through America’s Busiest Port Complex.” https://t.co/dXI48ppSwY pic.twitter.com/4Y2dJoNBuS

Seroka believes the next step for President Donald Trump and his administration to address China’s trade malpractices is to bring complaints against the country to the WTO and work with other countries instead of trying to solve the issue without seeking outside assistance.

“Having rules-based trade is where we need to go,” Seroka told the DCNF during a Tuesday press conference the Port of LA hosted to discuss the results of its study.

He added that as the “trade volume shifts,” the U.S. “must form new partnerships” because “there could be new opportunities to do business and create jobs that we have not been a participant in thus far.”

“I lived and worked in China. I was on the ground there for four and a half years. While I could walk out of my apartment and buy a DVD of a late-run Hollywood movie for $1, I know some reform has to take place,” he explained.

Seroka was also in China during the time that the country was working through stages of becoming a WTO member.

“I remember working in and around that process, and it was very challenging, to say the least. But much like the complaints about NATO, these are the global organizations that can exert a tremendous amount of influence if a strong framework is put in place, and if there are deficiencies today, I would look to the U.S. to be a leader in reform,” he added.

“The WTO is a collective that can allow for the voices of many — the defenitioning of countries who are participants and those who aspire to be. If we need to tighten up on the current application, then we must take that leadership position. We can’t govern the world by ourselves,” Seroka explained.

The president has taken trade matters with China into his own hands in part because he does not trust the WTO as it has allowed China to designate itself as a developing Asian country.

“The WTO is BROKEN when the world’s RICHEST countries claim to be developing countries to avoid WTO rules and get special treatment. NO more!!! Today I directed the U.S. Trade Representative to take action so that countries stop CHEATING the system at the expense of the USA!” Trump wrote on Twitter in July.

The WTO is BROKEN when the world’s RICHEST countries claim to be developing countries to avoid WTO rules and get special treatment. NO more!!! Today I directed the U.S. Trade Representative to take action so that countries stop CHEATING the system at the expense of the USA!

Seroka agrees that China’s self-designation as a developing country “needs to be revisited” as the second-largest economy in the world; however, he said the country’s “definitioning looks different than when the country acceded to the WTO back at the turn of the last century.”

“There’s work there that needs to be done immediately, and maybe that can be a broader discussion with other allies … because what we’re trying to do is not only elevate the worldwide economy but its consumers and workers on a global basis, as well,” he said.

Seroka explained that the U.S.-China trade war and the 20 months of tariff back-and-forth that has been going on since March 2018 has garnered a negative reaction from not only China but other trade allies, as well, such as the European Union, Canada and Mexico.

“We must find a mechanism of a respected organization … [and] take that leadership position. I think we could do that with much more strength if we go to the WTO with allies walking hand-in-hand,” he said.

Jonathan Gold, spokesman for Americans for Free Trade, a coalition of businesses and individuals in favor of free trade, similarly said several things can be done to hold China accountable for its trade malpractices without implementing tariffs, including partnering with U.S. allies.

“First and foremost, we should not being going into this alone,” he told the DCNF during Port of LA’s press conference. “We need to work with our trading partners who all share the same concerns … but also, in addition to that, make sure we’re not hitting them with tariffs, too. Right now, there’s not that willingness to work with us.”

“Bringing tariffs against your best allies and trading partners like what has happened under this administration … [makes it] much, much harder to push China in the right direction. What is clear is that a tariff-only policy has not worked in getting China to move on fundamental structural issues … and, in many ways, have backfired on us,” Yerxa said.

Angela Hofmann, co-executive director of Farmers for Free Trade, a nonprofit organization against tariffs, told the DCNF during the conference that farmers and bankers would like “some predictability” to see where the trade war is going in terms of a deal.

She also said during the conference that “retaliatory tariffs are disproportionately hurting agriculture,” and farmers are “using duct tape to keep things going.”

North Dakota Farmers Union President Mark Watne previously told the DCNF that farmers are losing the trade war and prices for agricultural exports to China have increased significantly, so farmers are selling fewer goods. As a result, not even subsidies cover half of what farmers need to “sustain the family farm” as the trade war continues, he said.

Seroka also added that while he can’t speak for Trump, “the WTO will be around a lot longer than this president,” and perhaps other U.S. leaders will turn to the organization in the future for assistance in holding China accountable.

Main Street business owner Gary Yacoubian, who makes homemade speakers for his business called SVS Sound Revolution, also previously told the DCNF that tariffs are not the right solution to leading China in the right direction.

“Tariffs are taxes paid by American businesses, farmers and consumers — not by China. This is why removing tariffs must be a part of the phase one deal,” he said.

The president announced a potential trade deal with China in October — the first phase of which was expected to be signed this month but could be pushed back to December. Chinese Commerce Ministry spokesman Gao Feng said on Nov. 7 that U.S. and Chinese officials both agreed to lift tariffs as part of the first phase of the deal, The Wall Street Journal reported.

“If the phase-one deal is signed, China and the U.S. should remove the same proportion of tariffs simultaneously based on the content of the deal,” Feng said during a Nov. 7 press briefing, according to the Journal. “This is what [both sides] agreed on following careful and constructive negotiations over the past two weeks.”