EXPLAINED: How The Army Corps Of Engineers Defends America 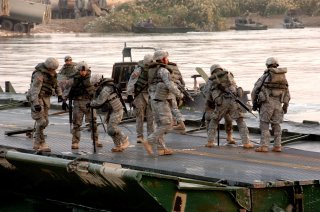 The United States Army Corps of Engineers has been crucial in helping the nation address the COVID-19 outbreak, and this has included building temporary hospitals and other medical facilities to ease the overflow of coronavirus patients.

Throughout its history, the Corps of Engineers has responded to natural disasters by providing humanitarian assistance. It has also played a crucial role in building key parts of the country's infrastructure including bridges, dams and many public buildings.

The Army Corps of Engineers was officially established by Congress on March 11, 1779, to help plan, design and prepare environmental and structural facilities for the U.S. Army. It was initially made up of civilian workers, members of the Continental Army and French Officers. Its history goes back a bit earlier to when General George Washington appointed the first engineer officers of the Army on June 16, 1775. Since that time engineers have served in combat in all subsequent wars.

The Department of Defense (DoD) established the Corps of Engineers as a separate, permanent branch on March 16, 1802, and gave the engineers responsibility for founding and operating the U.S. Military Academy at West Point. During the tensions that lead to the War of 1812, the Corps was charged with designing and building stone fortifications in key harbors and coastal locations from New York to New Orleans.

The Corps evolved from providing services just for military defense and was crucial in opening the American frontier, where its topographers surveyed and mapped the vast unexplored expanses of the American continent. In the 1820s Congress then authored the Corps of Engineers to improve the waterways to make it easier for transportation, while in the decades to follow it developed innovative hydrological technology that included levees to reduce the impact of flooding on the Mississippi Delta. The Corps also addressed the steep grade changes on the Ohio River by installing locks.

Since the Civil War, the Corps has had a role in responding to natural disasters and this included its first formal relief mission during the Mississippi Flood of 1882 when it supported the Army Quartermaster Corps' efforts to rescue people and property. It later played a crucial role in the Johnstown, Pennsylvania, flood of 1889 and the San Francisco earthquake of 1906.

The Army engineers supported the 9/11 recovery efforts in New York City, and later the levee failures in New Orleans during Hurricane Katrina, the Corps oversaw and managed a $13 billion overhaul of the city's levee system.

As part of its relief missions, it is charged by FEMA with delivering truckloads of bottled waters and other supplies to disaster victims.

Since the 1950s the Corps has also served in diplomatic and foreign aid missions, taking an engineering lead on infrastructure projects around the globe – and this has included buildings roads, highways, railroads, airports, ports and water systems from Africa to East Asia to the Middle East. It also played a role in the reconstruction of Afghanistan and Iraq.

It has remained the chief conservation agency for America's rivers, coastlines, lakes and wetlands and now operates more than 600 dams, and maintains 12,000 miles of inland rivers and canals. The Corps manages 926 coastal and inland harbors.

Today, the U.S. Army Corps of Engineers has approximately 37,000 soldier and civilian employees. Its mission remains to deliver vital public and military engineering and whether in peace or wartime to strengthen the nation's security. It is engineering solutions for the nation's toughest challenges.