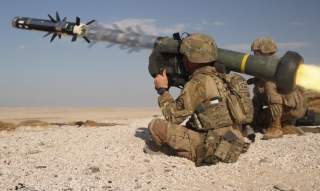 KYIV, Ukraine—Since April 2014, Ukraine has been locked in a land war in its eastern Donbas region against a combined force of Russian regulars, pro-Russian separatists, and foreign mercenaries.

During that time, Russia has used Ukraine as a testing ground for its modern warfare doctrines and technologies—in terms of both conventional and so-called hybrid military operations. Despite its disadvantages, Ukraine has weathered the storm and fought the war to a stalemate that has held since February 2015.

“The Kremlin ensures support for its firepower in the Donbas with a new generation of warfare equipment, while we find it much more difficult to keep up in this regard,” said Illia Ponomarenko, defense reporter for the Kyiv Post, an English-language Ukrainian weekly.

Since 2014, U.S. military aid has improved the survivability of Ukraine’s armed forces, and allowed them to fight with more precise, limited means, without relying on Soviet-era area-warfare tactics (which Russia has showcased in its indiscriminate bombing campaign in Syria), thereby reducing the risk of collateral damage. Also, and no less importantly, American aid sends a deterrent message to Moscow and boosts the morale of Ukraine’s soldiers and civilians.

“U.S. assistance has both a symbolic value and a practical one,” said Oleksiy Melnyk, co-director of foreign relations and international security programs at the Razumkov Centre, a Ukrainian think tank. “Most of the equipment and weapons go for the front-line troops and … they have helped to save lives.”

Ukrainians have the will to fight, that’s clear. Moreover, Ukraine has rebuilt its once dilapidated military into the second-largest standing land army in Europe in terms of manpower. Today, after more than five years of war, Ukraine remains one of the world’s top weapons-exporting nations and is able to meet many of its own defense supply needs.

Still, the former Soviet republic has some glaring shortfalls in its domestic military-industrial complex. Namely, when it comes to producing high-tech tactical battlefield technologies such as counter-battery radars and night-vision systems, as well as the ability to field certain big-ticket items, including warplanes and anti-aircraft defenses.

“Ukraine is indeed a major arms manufacturing nation—but we nonetheless desperately need U.S. military help,” said Ponomarenko, who has reportedly extensively from the war’s front lines. “The reason behind this is that our military in the Donbas faces an enemy that enjoys considerable superiority in many aspects of modern warfare, starting from the use of drones to radio-electronic jamming systems.”

Trump maintains he did nothing wrong and Zelenskyy, for his part, says he was not pressured.

Despite the political uproar, U.S. military aid to Ukraine is going forward unabated, underscoring the durability of a longstanding effort by the U.S. to shore up Ukraine’s capacity to defend itself from Russia.

Since 2014, total U.S. military aid to Ukraine has amounted to roughly $1.5 billion, according to the Pentagon. In a June 18 statement, the Department of Defense announced plans to send Ukraine $250 million in military aid this year. The State Department pledged an additional $141 million.

According to the Pentagon, U.S. military aid is tied to Ukraine achieving certain reform benchmarks.

American deliveries of counter-battery radars, night-vision devices, and armored Humvees have been a “game-changer” for Ukrainian forces, Ponomarenko said.

“Smart, more perfect weaponry gives us a real chance [against Russian forces],” Ponomarenko said. “And this is where U.S. military aid saves the day. It gives us weapons and equipment that are better than what our enemy has in Donbas in terms of mobile, high-tech warfare.

In particular, the 20 Lockheed Martin AN/TPQ-53 counter-battery radar systems the U.S. sent Ukraine in 2015 had a positive impact on the survivability of Ukrainian units using the system; their casualty rates dropped from 47% to about 18%, Ukrainian officials say.

Counter-battery radars detect and track incoming artillery or mortar rounds from their points of origin. A military force using the system has more time to take shelter and less time to return fire.

The U.S. has also provided Ukraine with tactical Raven drones, which can be hand-tossed by a single soldier in combat. This correspondent has witnessed Ukrainian combat forces using the Raven to direct artillery fire on enemy armored personnel carriers. The Ukrainians, however, complained the Ravens were too vulnerable to Russian jamming.

After more than five years of constant combat, Ukrainian troops remain engaged in a static, trench warfare conflict against a combined enemy force of about 35,000 troops.

A February 2015 cease-fire known as Minsk II failed to stop the fighting. Today, the war is mostly fought at a distance using indirect fire weapons like artillery, rockets, and mortars. Snipers also frequently engage targets across no man’s land, which can vary in width from a few kilometers in some places to others where the two sides are so close they can shout insults to one another.

Within the two breakaway territories in the Donbas, combined Russian-separatist forces maintain a fleet of roughly 700 tanks, of which about 500 are operational, according to Ukrainian military officials. That’s about three times more operational tanks than the number currently possessed by the United Kingdom, according to data from Jane’s 360.

Heightening the tension, Moscow has deployed about 80,000 troops along Ukraine’s borders capable of launching a rapid, armored invasion within weeks, current and former Ukrainian defense officials say. An additional 40,000 Russian troops are currently garrisoned in Crimea, along with missiles and bombers capable of striking mainland Ukraine.

A November 2018 confrontation between Russian and Ukrainian naval forces at the Kerch Strait raised the specter of a maritime clash between the two erstwhile Soviet allies in the Sea of Azov.

The ongoing, de facto state of war with Russia spurred Kyiv to embark on a rapid military buildup in 2014. To that end, Ukrainian lawmakers have ordered a complete overhaul of the country’s military industrial complex.

At the outset, Ukraine prioritized the reconstitution of its land army to deal with the immediate needs of the trench war in the Donbas. Yet, with the long-term Russian military threat in mind, Kyiv subsequently stepped up efforts to rebuild its air force and navy, too, as well as to adopt NATO interoperability standards.

“Russian aggression made it possible to allocate resources for the modernization [of Ukraine’s armed forces],” said Alexander Khara, deputy chair of the Black Sea Institute of Strategic Studies, a defense research institute.

“Yet, with all the great things in the Ukrainian defense industry, we still have gaps,” Khara told The Daily Signal. “We don’t produce jets and helicopters, or anti-ship missiles, though we still are able to build big ships. Given the nature of security threats, the defense demands are huge—from air defense to the navy.”

Ukraine’s projected 2020 budget for its armed forces is roughly $4.3 billion, according to a report published Wednesday by Viktor Plakhuta, an adviser to the Ukrainian parliament’s Committee on National Security and Defense.

That number, which equals 2.25% of Ukraine’s nominal gross domestic product, represents more than a twofold increase from Ukraine’s 2015 military budget. Still, Ukraine’s projected military budget is less than half of the roughly $9.1 billion requested by the General Staff of the Armed Forces of Ukraine, Plakhuta told The Daily Signal in an email.

According to Plakhuta, Ukraine is only able to provide itself with about a third of its defense hardware needs. Overall, money is tight. With a corps of 250,000 active-duty soldiers, personnel costs are spiking.

Also, Ukraine’s armed forces face an urgent need to restock armament reserves that have been depleted by years of war. Armament resupply comprises about 40% of the military budget proposed by Ukraine’s brass for 2020—representing about a $3.5 billion price tag.