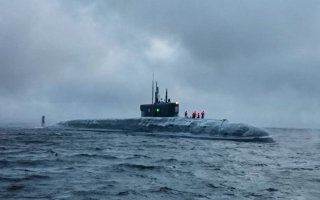 Russia’s shipbuilding industry is rapidly forging ahead with a new line of strategic submarines to reinforce the sea leg of Russia’s nuclear triad into the coming decades.

2020 was a big year for Borei II (also known as Project 955A), Russia’s flagship line of nuclear ballistic missile submarines. After spending eight years in construction, the first Borei II submarine Knyaz Vladimir was commissioned during a flag-raising ceremony earlier this summer. Knyaz Vladimir was handed off to the Northern Fleet, which has begun the gradual process of phasing out its Delta and Typhoon-class boats in favor of the newer Borei class. Also, this summer, the second Borei II submarine, Knyaz Oleg, was launched and is set to undergo state trials before entering service in the Pacific Fleet by the end of 2022.

Whereas Russia’s military modernization efforts have largely consisted of iterative updates to late Soviet hardware, the Borei class represents an entirely new design concept—as previously noted by The National Interest, the Borei class is twice as light as its Typhoon-class predecessor, marginally faster, and capable of fielding a much more powerful payload. The Borei class carries the RSM-56 Bulava ballistic missile system, a submarine-launched derivative of Russia’s highly capable Topol-M intercontinental ballistic missile. Bulava boasts an operating range of up to 10,000 km and carries a 500 kiloton nuclear warhead with a GLONASS-powered digital inertial navigation system. The Borei class employs a pump-jet propulsion system, boasting significantly lower noise levels than the Borei’s Soviet predecessors and many of its North Atlantic Treaty Organization competitors alike.

Of the ten planned Borei boats, the first three—Yury Dolgorukiy, Alexander Nevsky, and Vladimir Monomakh—were built to the original Borei standard. The rest, from Knyaz Vladimir onwards, will receive the Borei II upgrade package. There was some speculation that the Borei II vessels will carry up to twenty Bulava missiles, but it now appears that they will come with the standard sixteen missiles of the older Borei I submarines. Still, the Borei II revision promises a raft of iterative updates: among them, structural revisions and more efficient hull design, weapons targeting upgrades, lower acoustics for more consistent stealth performance, and crew living quarters improvements.

As previously noted by The National Interest, the Borei project will cost the Russian Navy a pretty penny. At around 750 to 890 million dollars per unit, the Borei seems cost-effective when compared to the 2 billion dollars per unit of its Ohio-class U.S. counterpart. But Project 995 is still fairly expensive in the context of Russia’s relatively modest Naval budget, especially considering that the Navy is concurrently pursuing several expensive projects that include the Yasen cruise missile attack submarine and the mysterious Husky multipurpose submarine.

With the recent commission of Knyaz Vladimir and the imminent arrival of Knyaz Oleg, there are five Borei II boats left to be built through the late 2020s— most of these are expected to join the Pacific Fleet, though specific service plans remain murky.