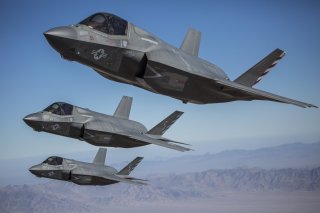 On Tuesday, a Marine Corps F-35B collided with a KC-130J refueling aircraft at approximately 4pm Pacific Daylight Time (PDT) during an air-to-air refueling mission in California, which caused the fifth-generation stealth fighter to crash. The accident was first reported on social media via a tweet sent out by the 3rd Marine Aircraft Wing.

The pilot of the aircraft was able to successfully eject from the aircraft and is being treated for any injuries, said 1st Lt. Brett Vannier, spokesman for Marine Corps Air Station Yuma in Arizona. The KC-130J also made an emergency landing in a field near Thermal Airport, which is roughly 130 miles northeast of San Diego.

According to reports all nine personnel – including the F-35B pilot along with the eight crewmembers of the KC-130J tanker – have been accounted for. Vannier added there were some mild injuries but everyone was safe.

The official cause of the crash is currently under investigation, the Marine Times reported.

The accident involved the short takeoff/vertical landing (STOVL) variant of the F-35 Lightning II Joint Strike Fighter. Tuesday's crash was the third Class-A aviation mishap for the Marines Corps in fiscal year 2020, which started on Oct. 1, 2019 and ended on Wednesday reported Military.com.

Earlier in September, a Sikorsky CH-53E Super Stallion made an emergency landing in North Carolina after an engine fire broke out on the heavy-lift helicopter. The crew was able to get out of the aircraft safely.

In May of this year, a civilian skydiving plane collided with a parked MV-22B Osprey in San Diego but no injuries were reported.

In 2018, six were killed during a Marine Corps refueling exercise involving a KC-130J and F/A-18D Hornet when the aircraft collided during a nighttime exercise off the coast of Japan.

In May, an F-35A flying out of Eglin Air Force Base in Florida, crashed shortly after takeoff. The fifth-generation, low-observable, single-seat, single-engine F-35A Lightning II was part of the 58th Fighter Squadron, 33rd Fighter Wing.

The mission of the 58th Fighter Squadron named the "Gorillas" is to train flight crew and maintainers on the Lockheed Martin-built aircraft. The unit became the first F-35A training squadron in October 2009 when it began preparations for training operations, and it received its first of Joint Strike Fighters in late 2010.

The F-35A crash in May came just days after an F-22 Raptor, which was part of the 325th Fighter Wing, also crashed outside Eglin AFB. Both the F-35A and F-22 pilots were able to successfully eject from their respective aircraft.