Explained: Who Is Dr. Anthony Fauci? 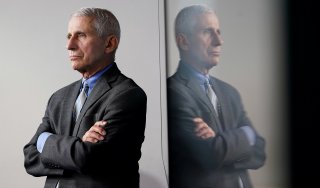 As Americans become more normalized to the daily televised White House press briefings responding to the coronavirus pandemic, they’re getting more used to seeing the doctor who often stands next to President Donald Trump, and who takes the microphone to explain the medical science behind the administration’s decisions. But who is Dr. Anthony Fauci?

While his name might be new for most Americans, it’s very recognizable to those for whom dealing with pandemics is the norm. The New York Times has referred to him as “the nation’s leading expert on infectious diseases,” while the Wall Street Journal dubbed him “the most influential person in American public health.”

As Director of the National Institute of Allergy and Infectious Diseases (NIAID), Anthony Fauci has served under six presidents and been involved in the American response to some of the worst disease outbreaks of the past fifty years, including AIDS, anthrax, swine flu, Ebola, and now the coronavirus.

Born in Brooklyn as the son of a pharmacist, Dr. Fauci earned his undergraduate at the College of the Holy Cross, a private Jesuit school, before attending medical school at Cornell University. He entered the public health sphere after joining the National Institute for Health (NIH) in 1968.

In 1984 Dr. Fauci was appointed head of NIAID and has declined multiple offers to manage his agency’s parent, the NIH. In his current role, he is one of the federal government’s highest-paid employees, earning $400,000 a year—more than Vice President Mike Pence.

Neither is this Anthony Fauci’s first entry onto the presidential conversation. In 1988, during the fall presidential debate, then-Vice President George H. W. Bush praised the kind of American doctors “who are clean, honorable, and out there setting the pace. I think of Dr. Fauci, probably never heard of him…He’s a very fine research top doctor at the National Institute of Health, working hard doing something about research on this disease of AIDS.”

A lifelong runner, Dr. Fauci was known to run up to seven miles a day during the height of the AIDS crisis to clear his mind. “Mostly I think the benefit for me is a stress reliever, because I have a pretty high stress job,” he said in 2016. “I spend about fifteen hours a day in my office at the NIH, maybe more. So, getting outside in the day and hearing the birds and smelling the grass is a very pleasing thing to me.”

Now that he’s one of the lead medical professionals on the task force to combat the coronavirus, the worst public health crisis in America in the past century, Fauci says he now works closer to nineteen hours a day and gets only five hours of sleep. But he still finds time to power walk 3.5 miles almost every day, all at the age of seventy-nine.