Explained: Why the U.S. Army Will Purchase Ammunition for Russian Weapons 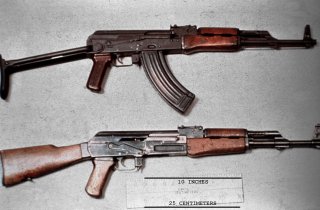 Civilian shooters have had to deal with ammunition shortages in recent years, and now the U.S. Army could be short on specific ammunition as well. But don’t worry; the U.S. military is more than well equipped to handle any conflict or crisis that might arise.

Where it is short on ammunition is for Russian/Soviet small arms including the AK-47, PKM machine gun, Makarov pistols and SVD Dragunov among various other weapons—and this month the Army Contracting Command has posted a notification requesting information from contractors regarding their ability to produce and deliver non-NATO commercial ammunition.

The U.S. military isn’t suddenly adopting Cold War vintage small arms, but as Defence-Blog.com reported, the Army Contracting Command wants to purchase the Special Ammunition and Weapons Systems (SAWS) for the U.S. Department of Defense to practice fighting against weapons America’s rivals or enemies might use.

Training exercises with weapons used by potential “adversaries” are actually common, especially as those weapons are employed not only by Russia but have been widely exported throughout Africa, Asia and the Middle East. This allows U.S. soldiers to have a familiarity with the weapons but also to recognize the report (sound) of those small arms when fired.

“The military command trains Spec[ial] Op[erations] groups to operate Soviet-made weapons in cases when their M-4s run out of ammo and they still have to fight terrorists,” an undisclosed source in the Russian Special Operations Forces told Russia Beyond. “Here in Russia, we also train with NATO-made H&K and M-4 assault rifles and pass numerous drills with these kinds of weapons. It’s a common thing to run out of ammo during operations abroad and then having to pick up your enemies’ weapons to fight. In real battles, milliseconds count, so you have to be a perfect M-4 and AK-47 operator to survive combat.”

This isn’t a new development, and in May 2019 the Army Contracting Command also sought to acquire ammunition for Russian-made weapons. This year, the U.S. military is also seeking to procure large-caliber projectiles designed for use with the Soviet/Russian-designed T-64, T-72, T-80 and T-90 main battle tanks (MBTs). In addition, the U.S. Army is seeking to purchase artillery and mortar projectiles, rocket-propelled grenades, aviation rockets and missiles, anti-tank missiles and high explosive (HE) rockets.

However, Russian-based companies need not apply as the ammunition must be produced and bought on American soil due to sanctions that have banned any and all imports of Russian-made weapons and ammunitions. There is some small irony as Rostec, the top state-owned military industrial conglomerate, has made it clear that it would happily sell ammunition to the U.S. military for Kalashnikov small arms and other Russian-made weapons.

What is also interesting about this is that the Russian-made AK-12 was actually presented at this past January’s SHOT Show (Shooting, Hunting, Outdoor Trade Show) in Las Vegas, despite the fact that the new commercial version of the weapon still can’t be legally imported into the U.S. due to the sanctions imposed by Washington.