Explainer: How to Flip a Yield Curve 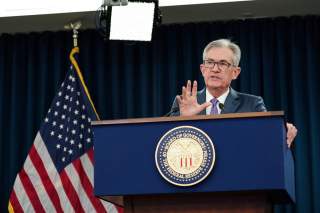 Yet the Fed still has a lot to answer for. For even if panic alone is to blame for it, the fact remains that an inverted yield curve, whatever its underlying cause, is a dangerous thing.

If the recent yield curve panic proves anything, it proves that, in financial markets, what may start out as a mere statistical correlation, and possibly a spurious one, can become a genuine causal relationship. In particular, if enough people subscribe to a post-hoc fallacy, it may not stay a fallacy for long.

It was, therefore, just a matter of time before the discovery that inverted yield curves often anticipate recessions resulted in the world’s first yield-curve induced panic. And the distance between panic to recession is no great stretch. Knowing that the curve has turned turtle, and anticipating tumbling stock markets and shrinking incomes, the public rushes to trade stocks for more liquid assets, while banks tighten lending standards. Lo and behold, stocks do tumble, and incomes do shrink. A slowdown then threatens. Should the monetary and fiscal authorities fail to avert it, the slowdown can become a contraction. If the contraction lasts, it becomes a recession. And all this because the yield curve went concave. Post hoc ergo propter hoc. Really.

That an inverted yield curve now strikes the general public much as that acorn struck Chicken Little isn’t itself the Fed’s fault. Although Fed officials and researchers have been among those who have drawn attention to the coincidence of past inversions and subsequent recessions, their writings on the topic have been anything but sensational. “Not all declines in the yield-curve slope are bad news for the economy,” says a representative piece from the Chicago Fed, “and not all instances of steepening are good news either.” Quite right.

Yet the Fed still has a lot to answer for. For even if panic alone is to blame for it, the fact remains that an inverted yield curve, whatever its underlying cause, is a dangerous thing. The Fed therefore ought to do what it can to keep the yield curve in fine fettle. Instead, Fed policies deserve the lion’s share of blame for the yield curve’s recent gymnastics.

Those policies consisted, first, of the Fed’s October 8th, 2008 switch to a “floor system”of monetary control. That switch severed the traditional connection between the direction and extent of the Fed’s asset purchases and the level of overnight interest rates. In the old days,  the Fed’s asset purchases would confront banks with reserves they didn’t need, which the banks would then offer to other banks on the fed funds market. Short-term interest rates would then decline. Because the Fed mainly bought short-term Treasuries, its purchases tended to steepen rather than flatten the yield curve. Under a floor system, in contrast, the Fed can acquire assets without lowering short-term rates. Instead, it regulates those rates by adjusting the interest rate it pays on banks’ excess reserves.

Fed officials saw this extra degree of freedom as a virtue of the new arrangement, in part because it granted the Fed powers of “yield curve control”  it hadn’t wielded since WWII. Those powers allowed the Fed to target not just short-term rates but, using large-scale asset purchases and sales, longer-term ones. Alas, they also made it that much easier for the Fed to flip the yield curve, if only unintentionally.

The Fed’s subsequent rounds of Quantitative Easing, including Operation Twist, were all exercises in yield curve control. During three rounds of QE between March 2009 and December 2014, the Fed purchased $3.8 trillion in long-term assets, with the express aim of lowering long run interest rates. That amount—to place it in perspective—was roughly a third of the total value of publicly-held U.S. government debt at the end of 2012. Because short-term rates were mired near their zero lower bound, such large long-term debt purchases were bound to flatten the yield curve; indeed, they flattened it, not just in the U.S. but elsewhere, and considerably. That was, indeed, their purpose. Operation Twist, which involved the Fed’s gradual swapping of $400 billion in shorter-term Treasuries with as many longer-term Treasuries, contributed some further flattening.

From Flat to Inverted

While the Fed’s postcrisis actions left the economy with a very flat yield curve, they didn’t invert it. Nor could they easily have done so as long as overnight rates remained stuck near their presumed zero lower bound. The risk of an inversion arose only once the Fed began raising its policy rates at the end of 2015. In all, as the chart below reminds us, between December 2015 and December 2018, it raised the interest rate on excess reserves by 215 basis points. With 10-year Treasuries yielding little more than 200 basis points when that tightening cycle started, the risk of a yield curve inversion depended on the extent to which their yield also responded to the Fed’s tightening. In fact, it did respond, but only modestly, from about 2.25% at the time of the Fed’s first rate hike, to about 2.7% at its last, and with many a dip in between. For most of the first quarter of 2019 the gap between the 10-year yield and the effective fed funds rate was less than 30 basis points. And in March that gap briefly turned negative for the first time since the start of the Great Recession.

To his credit, St. Louis Fed President Jim Bullard was among the first to see trouble looming. In a briefing he gave in Little Rock, Arkansas in December 2017, Bullard warned that “There is a material risk of yield curve inversion over the forecast horizon if the FOMC continues on its present course of increases in the policy rate.” He also recognized the possibility that “longer-term yields in the U.S. are being held lower in part because of the size of the Fed’s balance sheet.” Finally, he observed that “The simplest way to avoid yield curve inversion in the near term is for policymakers to be cautious in raising the policy rate.” In a July 2018 presentation Bullard renewed his warning, noting that since December, events had “flattened the yield curve further, and imminent yield curve inversion in the U.S. has become a real possibility.” Finally, in an article published in October 2018, several months before the Fed’s last and most controversial rate hike, Bullard repeated his warning once again, calling the still-mounting risk of an inversion “a key issue in U.S. monetary policy in the near term.”

That Bullard’s advice wasn’t followed is now notorious. Instead of being cautious about raising its policy rate, the Fed raised it yet again that December, adding insult to injury by suggesting that 2019 would probably bring more rate hikes. It took this position, not because circumstances called for it, but because Fed officials were committed to “normalizing” monetary policy, and because they equated “normal” monetary policy with a fed funds rate in the neighborhood of 3 percent—a figure reflecting a real rate of 1 percent plus 2 percent inflation. That flagging productivity might make even a 1 percent real funds rate optimistic, and that inflation might persistently fall short of the Fed’s 2 percent target, were possibilities the Fed was not yet prepared to recognize.

In the meantime, the 10-year Treasury rate had begun a steep dive that’s still in progress. The Fed’s actual and planned rate hikes themselves contributed to that decline, by rattling markets and  lowering inflation and growth projections. So did the Trump administration’s increasingly belligerent trade policies. Finally, the Fed made another, less obvious contribution to falling bond yields by prematurely ending its planned balance sheet unwind. So long as that unwind continued, it put at least some downward pressure on long-term bond prices, propping-up their yields correspondingly. But in March 2019, the Fed announced that it would cease unwinding this fall. Then, in its July meeting, the FOMC made two decision with offsetting yield curve consequences. It decided at last to reverse the December 2018 rate hike it should never have undertaken. But (for reasons I explained in my last post) it also put an immediate end to its balance sheet unwind. Whether by coincidence or not, the outcome of these combined measures was a steep decline in the 10-year Treasury yield that almost perfectly matched the decline in the short-term rates. Within days, the inversion Bullard had long warned against became a reality at last.

Could the Fed have avoided it? Had it refrained from that notorious December 2018 rate hike, it might at least have put the inversion off for a time. But it could also have done a lot more. In particular, the Fed could have reduced its policy rates more aggressively, while continuing to unwind its balance sheet. While the unwind would reduce the supply of bank reserves, a sufficiently lowered interest rate on excess reserves could have reduced the demand for reserves more than proportionately. In that case, short-term market rates would have fallen, even as the Fed boosted up long-term rates by shrinking its long-term Treasury portfolio. Together these steps would almost certainly have sufficed to keep the yield curve right-side up. It’s true that those steps would have meant sacrificing the Fed’s floor system of monetary control, and with it the Fed’s future ability to manage the yield curve. But—judging by how it has managed that curve thus far—that’s a sacrifice we’d have had no reason to mourn.