Explainer: Why Gas Prices Go Up (And How to Keep Them Low) 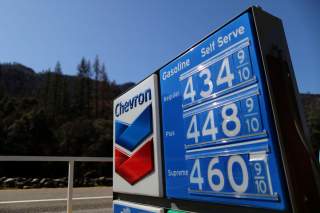 As Memorial Day kicks off the summer season, hotdogs, cold beers, and pool openings aren’t the only things on the minds of Americans. AAA expects a record 37.6 million Americans to hit the road and drive more than 50 miles for the long weekend, which means gas prices are also on their minds.

Nationally, gas prices have risen steadily since the beginning of the year, though they dropped recently to $2.86 per gallon. Snow and unseasonably cold weather in the Midwest and Western U.S. kept Americans at home in recent weeks, decreasing demand and lowering prices a few cents per gallon. The current national average is nearly identical to what gas prices were a year ago.

Weather, though, is just one component that affects the price at the pump. The price of crude oil is the single largest factor.

According to the U.S. Energy Information Administration, crude oil prices make up 57% of the price of retail gas. Federal and state taxes, refining and distributing, and marketing accounts for the rest. A number of factors both in the U.S and around the world affect the supply of and demand for oil, which consequently influences the price we pay.

Counterbalancing events have kept oil prices relatively stable as of late. The United States is now the world’s largest oil producer, which has offset dwindling supplies from Iranian sanctions and Venezuela’s economic collapse, as well as falling production in Azerbaijan, Kazakhstan, and Canada.

A recent drone strike shut down a Saudi Arabian pipeline, and attacks on two of its oil tankers has Mideast tensions running high. Continued unrest in Libya could threaten future supplies.

On the demand side, a weaker-than-projected global economic growth, particularly in Europe and Asia, lowered oil consumption. Major trade disputes between the U.S. and China create economic uncertainty, and tariffs that raise prices on consumers weaken economic growth and oil demand. But the American economy is strong, and the time for summer vacations is right around the corner, which puts upward pressure on prices.

There’s a lot at play here, which is why forecasting where gas prices will be in the next six months is as reliable as a Magic 8 Ball. And let’s not forget public policy. Clearly, a number of variables that are out of policymakers’ control (such as weather) affect gas prices.

Yet, many federal government policies artificially inflate gas prices and here is one area where Congress and the Trump administration can and should do something.

The first order of business for Congress is to do no harm.

For example, several lawmakers have floated the idea of increasing the federal gas tax to pay for a massive infrastructure bill.

But if households spend more on gas, they have less disposable income to save or to spend, whether on entertainment, on clothes, or on health care. Businesses will face higher costs for transporting their goods and will pass those costs on to consumers. Low-income families who spend a higher percentage of their budget on energy bills will be hardest hit.

Supporters of the gas tax argue that it is an effective user fee, in effect “charging” drivers for their use of the roads and resulting pollution. In practice, however, the gas tax is a dishonest ploy to raise taxes on all Americans and allow the size and scope of the federal government to grow unchecked.

Alternatively, Congress should empower state governments and local governments, which are better connected to the true infrastructure needs of their communities.

Furthermore, Congress should implement reforms that will open access to energy markets and drive down prices at the pump. When it comes to oil and natural gas production, Americans are fat and happy. As the world’s largest oil and gas producer, the U.S. is an undisputed energy powerhouse. But that is no excuse for policy complacency.

Opening access to America’s abundance of resources now will ensure that businesses can respond more effectively to changes in prices, rather than waiting for Congress to react after prices become politically uncomfortable. Congress should:

These are the policy reforms necessary for American energy producers to capitalize on our wealth of natural resources, which will drive the economy and the prices at the pump in the right direction.