Exposed: How a Japanese F-35 Crashed During a Combat Exercise 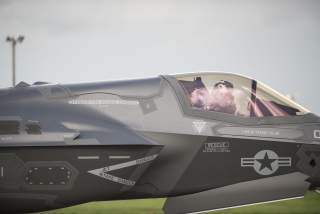 The fatal crash of a Japanese Air Self Defense Forces (JASDF) F-35A in April 2019 lead to much discussion about the future of the program. Tons of speculation as to whether the crash was due to aircraft error, pilot error, or other factors occurred. Now, fewer than two months later, the JASDF has released an official report as to the cause of the crash. The report provides a rough chronology of the crash, detailing the altitude and actions of the aircraft before the crash as well as providing a useful visualization of the aircraft’s maneuvers.

The crash occurred during an air combat training exercise, following a controlled left descending turn. The turn was initiated to gain space from another aircraft in the combat area, but halfway down the pilot radioed to “Knock it off,” signaling an end to the training. Past that point, the descent rate increased until the crash.

At the time of the last “Knock it off” transmission, the pilot’s voice was calm and not strained, and the aircraft didn’t diverge significantly from a straight path following that transmission. As a result, the report concludes that its unlikely that the pilot lost consciousness or control due to G-forces during this period.

The report also states that the pilot did not suffer any mechanical difficulties during the initial descent and that no recover maneuver was attempted. The second phase of descent after the “Knock it off” transmission was at a rate only slightly higher than that of the original phase of descent.

As a result, the report concludes that the pilot became spatially disoriented and was probably unaware that he was that close to the ground. During the second phase of descent, the aircraft was dropping at a rate of more than 1000 feet per second from a height of fewer than 16000 feet, giving the pilot fewer than 16 seconds to react.

While the spatial awareness of the pilot is often augmented by various HUDs, visor-mounted displays, and multi-function displays in the F-35’s cockpit, the relative novelty to older Japanese aircraft could have caused the pilot to misread the position and “feel” of his aircraft. Depending on the weather conditions at the time, it’s possible that the pilot was unable to see the water rushing up at the aircraft until it was too late.

With regards to the program as a whole, the report appears to be fairly confident in the mechanical state of the aircraft themselves. The report recommends additional training and simulator time for JASDF F-35A pilots. As such, procurement is likely to continue at existing levels, without change.