An F-15 Fighter Jet With Its Tail on Fire? Watch This. 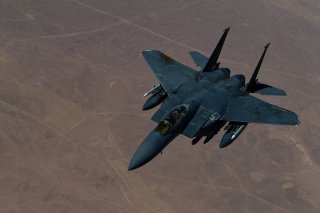 At the RAF Lakenheath base in England, a U.S. Air Force F-15E “Strike Eagle” experienced an eye-opening malfunction during takeoff—but its pilot had no idea until two hours later.

At roughly 9 a.m. local time, the jet took off from the British airbase, before flying towards the North Sea; it returned to base roughly two hours later. Until they landed, the flight crew had no idea anything was wrong; the plane flew the mission normally and without incident. However, observers on the ground immediately spotted a problem: the aircraft was unusually spitting fire out of the back of one of its engines.

What had happened? The most likely explanation, given the footage that was taken of the incident, is that the “turkey feather” on the right side of the jet’s exhaust nozzle was somehow damaged.

The F-15E jet uses two Pratt & Whitney F100 turbofan engines. Each of these engines contains a nozzle petal and an actuator. When the plane is working correctly, the nozzle is controlled by the actuator; when the plane’s afterburners are activated, the nozzle expands, making the exhaust’s diameter larger and propelling the plane more quickly.

From the footage, it appears that the right side of the nozzle remained open, spewing exhaust in the wrong direction and creating the dramatic fire effect.

The damaged nozzle did not affect the flight at all, and the pilot reported no difficulties with handling the plane during its two-hour flight. Before the flight’s end, a ground observer called the base to inform them of the issue.

While no one was harmed in this incident, the fact that the aircraft was able to fly without difficulty in spite of the malfunction underscores the F-15E jet’s reliability. The U.S. Air Force has made motions toward downsizing its tremendously expensive F-35 fleet in favor of increased F-15E jets. Specifically, the Air Force has indicated that it will expand the mission of F-15EX fighters, the latest upgrade on the nearly half-century-old jet.

In the same vein, many international partners of the United States, which had previously indicated their interest in purchasing F-35 aircraft, have shifted their orders to instead purchase the comparatively cheaper F-15EX.

One such nation is India, whose prior interest in the F-35 jet placed the United States in a difficult position. J. R. McDonald, Lockheed Martin’s Vice President for business development, suggested in September 2020 that India was not prepared for the F-35 jet, suggesting instead that they focus on F-14EX purchases.