The F-15EX Fighter: 5 Things You Really Need To Know 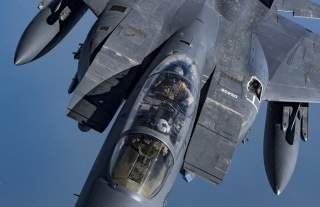 If new F-15EXs are purchased, would the Air Force retire older F-15s rather than upgrading them? How many upgrades would be foregone for each new F-15 purchased?

The decision to revitalize a 1970s fighter was always going to be controversial. The revival of the vaunted F-15 Eagle, in the form of a twenty-first century F-15EX, is a major decision on many levels.

The Congressional Research Service, Congress’s research arm, thinks legislators need to consider a few questions regarding the F-15EX. Namely, what purpose will it serve, and how will it affect other programs such as the F-35?

The proposed FY2020 defense budget requests $1.1 billion to buy eight F-15EXs, leading to an eventual total of 144 aircraft, plus another $949 billion to rejuvenate existing F-15s. The first Eagle – the F-15B – was delivered in 1974: the Air Force has 453 F-15 C/D fighters and F-15E strike aircraft, with the newest aircraft dating back to 2001. Ironically, it is foreign air forces, such as Israel, Saudi Arabia and Qatar, that have the newest and most advanced F-15s.

“Current F-15s have stronger airframes and more advanced sensors, processors, and flight control systems than those in the U.S. fleet. Many also include conformal fuel tanks to extend range and increase payload,” CRS notes. “The proposed F-15EX would be based on the most advanced Eagles, currently in production for Qatar, and add radar and other subsystems unique to the United States. Boeing says that the F-15EX would have 70% parts commonality with existing U.S. F-15s.”

The theory is that the F-15EX would be a quicker and cheaper fix to solve the problem of an aging fighter fleet, though it is not a theory that the Air Force necessarily subscribes to. “Air Force Secretary Heather Wilson has said publicly that the Air Force did not request the F-15EXs in its initial FY2020 budget submission,” CRS pointed out. “This proposal appears to have been added by the Office of the Secretary of Defense during the budget build process, without a request for proposals or explanation.”

Should the acquisition of new fighters be a competitive procurement?

What are the relative costs of upgrading and modernizing existing F-15s as opposed to buying new ones? How many flight hours does the Air Force expect to get from the jets in each case?

If new F-15EXs are purchased, would the Air Force retire older F-15s rather than upgrading them? How many upgrades would be foregone for each new F-15 purchased?

How does the replacement of F-15s fit with the Air Force’s declared goal of growing to 386 squadrons.

If stealthy aircraft are required in a given conflict only until the air defenses are taken down, which allows older-technology aircraft to operate with impunity, does it make sense to size the buy of fifth-generation aircraft to requirements for the early phases of conflict?

What is DOD’s commitment to completing the planned buy of F-35As?

How does the F-15EX fit with the current National Military Strategy emphasizing capability against sophisticated adversaries?

These are significant question marks over the F-15EX program. Non-competitive acquisitions of expensive weapons can end badly, though the F-15EX should have enough commonality with the proven F-15 to mitigate some of the risk.

More interesting is whether the F-15EX buy will inevitably impact the F-35 program. In theory, the fifth-generation F-35 will use its stealth capabilities to destroy enemy air defenses, allowing fourth-generation aircraft designs like the F-15EX to complete their missions. But at almost $100 million apiece for the F-35, compared to $80 million or so for the F-15EX, it will be tempting to opt for the cheaper plane.