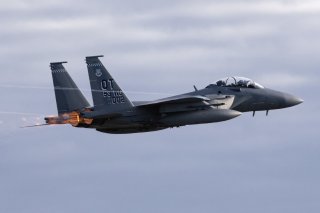 The upgraded Boeing F-15EX Eagle II, which is expected to have a structural life that could support the aircraft in service through 2050, is far more than just an improved F-15. It was developed to be a next-generation two-seat variant of the combat-tested, 1980s-era aircraft. While still a fourth-generation fighter, the F-15EX is loaded with new adapted technologies while the platform was designed to be further upgradeable, which could make it a viable, lethal, high-threat environment-capable attack platform for years to come.

This was a significant milestone for the aircraft.

“We’ve never done full, large-scale operational tests with the F-15EX, because it’s only been in the U.S. Air Force’s hands for six months,” explained Lt. Col. Kenneth Juhl, Air Force Operational Test and Evaluation Center (AFOTEC) F-15 tester. “The fact that we’re going this fast in operational test is definitely owing to the chief of staff of the Air Force’s accelerate change or lose mentality.”

The service will have to put the aircraft through tests, but still be careful with it—as there are currently only two F-15EXs in existence.

The Air Force accepted delivery of two aircraft at Eglin AFB, Florida, in March and April 2021 respectively. The platform is anticipated to join the F-35 Lightning II, F-16 Fighting Falcon, and A-10 Thunderbolt II along with a sixth-generation fighter program as part of the four-plus-one concept intended to streamline the fleet. According to Boeing, the F-15EX is a “ready-now replacement“ for the F-15C—and could serve as a backbone fighter for the Air Force for decades to come.

Already, the F-15EX has undergone a series of developmental tests that are meant to ensure the aircraft adheres to the required build specifications and safety standards. It has also conducted operational missions as part of exercise Northern Edge in Alaska.

“The main focus here is to provide the initial push for operational tests and evaluation to really evaluate the platform from an end-to-end perspective with the addition of a robust threat environment that we have here at Nellis,” said Colton Myers, Operational Flight Program Combined Test Force F-15EX test project manager. “That way, when we write our initial test reports, we’re giving an accurate look to the combat Air Force and the Guard as to what the platform is capable of when it initially fields.”

Maj. Kevin Hand, an F-15EX experimental and operations test pilot with the Air National Guard-Air Force Reserve Test Center, is among just a handful of pilots who have been charged to fly multiple day and night missions with defensive and offensive counter-air operations while at Nellis AFB.

“The big thing we’re trying to take away is really showing the differences between the EX and the C model,” Hand explained. “A big improvement the EX has is that it’s a digital flight control system, so it’s a fly-by-wire aircraft, versus the traditional C model, which is a standard hydro-mechanical aircraft completely controlled by the pilot, versus now a computer controlling the airplane.”

During the two-week evaluation, in addition to operationally testing the aircraft, tests will be conducted on the Eagle Passive Active Warning Survivability System (EPAWS).

“The EPAWS system is the next-gen advanced electronic attacks as well as electronic protects system that the EX and Strike Eagles are currently testing and developing and hopefully fielding in the relatively near future,” said Hand. “That’s going to give us the ability to essentially go into some of these more advanced threats or aerial denial kind of situations where we can now self-protect and self-jam our way through.”

Nellis AFB has been seen as the best location to conduct the operational testing because it offers the best air-to-air and surface-to-air training range, while it also provides the highest fidelity data on the backend to be able to know whether the systems worked.

“Oftentimes, we go out there as pilots, and we think that the airplane works as well as it should, but behind the scenes, we dig into some of the instrumentation, and it wasn’t exactly what we remembered,” said Col. Juhl. “Every so often, we need the instrumentation folks to help us out with what was really going on.”

The Nellis range complex also offers the ability for testers to receive instant feedback of how the airplanes performed, as well as for the data to be able to analyze it in very close detail.

Following the tests at Nellis AFB, Myers said the planes will return to Eglin AFB for more developmental tests.