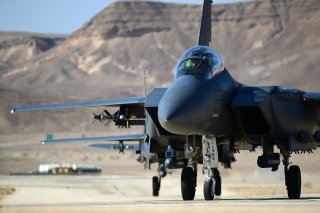 By June 1982, the Lebanese Civil War had been going on — off and on — for seven years. It began as a conflict between Christian Planange Party militia and various Muslim factions, including, the PLO (which had been in Lebanon since 1970, following its ousting from Jordan). As explained by Steve Davies and Doug Dildy in their book F-15 Eagle Engaged,  in May 1976 the Syrians added their troops, tanks and aircraft to the mix, ostensibly to stabilize the situation but ultimately to support the Muslim factions and PLO, securing the Damascus—Beirut highway that stretches across central Lebanon. To provide coverage for its south flank — facing Israel — the Syrian 10th Armored Division later deployed across the Bekaa Valley. To protect it from Israeli air raids the Syrians deployed three brigades — totaling 19 batteries — of SAMs. These included two batteries of SA-2s, two of SA-3s and 15 of the new and highly effective SA-6 “Gainful.”

Believing a Christian government in Lebanon was in its interests, Israel supported it while attempting to “punish” the PLO for its occasional bombardments and terrorist attacks against Israeli coastal and northern border settlements. Knowing that it might eventually have to push the PLO, and their Syrian “protectors” out of southern Lebanon, the IAF kept up a pattern of reconnaissance missions that kept watch over PLO bases and movements as well as photographing Syrian SAM battery positions, and collected “electronic order of battle” (i.e. radar frequencies, reaction times, etc.) information. Since overflight of the SAM sites was extremely risky, the Israelis resorted to using their Ryan Teledyne Firebee II reconnaissance drones.

In late May and early June 1982, the PLO conducted a 12-day artillery/rocket bombardment of northern Israel that caused 60 civilian casualties, brought life in Galilee to a standstill and saw Israelis fleeing their homes and settlements for the first time since 1947. On Jun. 3, the last straw was the PLO’s attempted assassination of the Israeli ambassador in London. The Israeli government ordered a full-scale ground invasion to remove the persistent PLO threat once and for all. At 11:00 hours on Jun. 6, elements of seven Israeli mechanized divisions – 60,000 troops and 500 tanks – crossed the border into southern Lebanon in three wide columns: one up the coastal plain, one through the Lebanese mountains and the third into the Bekaa Valley to keep the Syrians from intervening.

Fighting was heavy and in spite of Israeli pleas for the Syrians to stand aside, the two sides clashed in a series of engagements and Israeli fighters shot down seven Syrian MiGs in the first three days of the campaign. On the ground, the western force of the offensive made good progress up the coastal plain until it stalled in front of Sidon, while the center force overcame PLO resistance in the ancient Beaufort Castle on Jun. 8, opening the Bekaa Valley to further advances and the clash of Syrian and Israeli troops and tanks the next day. These began under the protective umbrella of five SA-6 batteries that had moved south to fend off IAF air attacks. This in turn necessitated a dedicated campaign to eradicate the high-threat SAMs so that the IAF could continue to support the advance and its forces in combat.

The IDF/AF had been planning to do just that for several weeks. Having plotted the SAM site locations and learned their operating frequencies and modes, these were loaded electronically into Delilah SAM decoy drones, Keres truck-launched anti-radiation missiles (ARMs), and Ze’ev surface-to-surface missiles (SSMs). In order to give the impression of a large raid driving deep into the Syrian SAM defenses, numerous Delilah decoys were launched. As the SA-6s began engaging them, at 14:00 hours the Keres ARMs and Ze’ev SSMs were launched, pummeling the Syrian SAM batteries with repeated hits. In the first ten minutes, ten batteries were either inoperable due to hits or because they had fired off all their ready missiles.

Four minutes later the first wave of fighter-bombers – 26 F-4Es and a number of Kfir C2s — swept in, the Phantoms attacking the batteries with AGM-65 Maverick TV-guided missiles, and AGM-45 Shrike and AGM-78 Standard ARMs, while the Kfirs hit SAM control vans and missile storage areas with “iron bombs.” As the first wave departed, 40 A-4s and Kfirs roared in, spreading cluster bombs across the SAM missile positions while specially configured F-4Es used 2,000Ib laser-guided bombs against surviving radar sites and control vans. By the time this wave turned south at 14:35hours, 17 of the 19 SAM batteries had been knocked out.

The MiG-21s and -23s were at an almost total disadvantage against the Israeli F-15s and F-16s. While the Israeli fighters had long-range radars allowing them to position themselves advantageously for the attack, the MiGs were limited to initial GCI vectors from radar sites back in Syria, and as they approached the Israeli fighters, electronic jamming rendered their radars useless and disrupted their radio contact with the Syria-based GCI units. As one Syrian pilot reported: “When we closed to 10-15km [6-9 miles] to the enemy, our radars would go black and we would lose all means of detecting them. Heavy jamming wasn’t concentrated on our radars alone, but also on our communications with ground control.”

Jun. 11 was the last day of continuous combat as a hastily bartered ceasefire went into effect at noon that day. Nevertheless, both sides fought with renewed vigor. To help the Syrian ground forces stave off defeat, the Syrian air force introduced larger numbers of “Floggers” into the air battle using air-to-air MiG-23MFs and MSs to engage IAF F-15/16s, while the more limited MiG-21s provided close escort to defend the MiG-23BN air-to-ground ‘Flogger-Fs.” Additionally Syrian air force MiG-25s flew high-speed, high-altitude profiles over the Bekaa Valley in an attempt to lure the Israeli fighters to “look up” with their radars and thus decoy them away from the strike formations ingressing at low altitudes.

Down low, the Syrians repeated their tactics of the prior day with two large waves of air-to-ground MiG-23BNs (each squadron sized) ingressing at low altitudes, each escorted by a squadron (or what remained of one) of MiG-21s. At medium altitudes, the sweep by the air-to-air “Flogger-Bs” and “Es” failed to keep the F-15s and F-16s away from them and again serious losses occurred. Overall, seven “Flogger-Fs”. were lost to IAF fighters and another to an Israeli army MIM-23B I-Hawk SAM. The MiG-21s providing close escort lost six of their number in a series of engagements, half to F-15s.

Officially the Israelis claimed that 88 Syrian aircraft were shot down during Jun. 5-12, 1982. IAF F-15s were credited with 33 victories. Another 44 kills were claimed by IAF F-16sand one IAF F-4E was credited with shooting down a Syrian MiG. The Israeli losses have never been satisfactorily admitted, but are believed to have totaled 13 aircraft: including one F-16A, one F-4E, one Kfir, two A-4s and several helicopters.