F-15X vs.F-35: The Air Force Debate That Is Dominating the Headlines 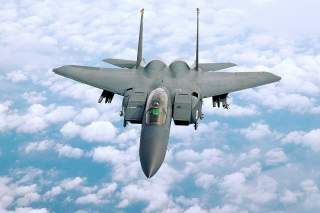 Since the March release of the 2020 defense budget, the Pentagon’s decision to purchase new F-15X fighters to replace geriatric F-15Cs has occupied a disproportionate share of defense coverage, analysis, and congressional attention. Confusion reigns, as initial explanations by the Pentagon, convinced almost no one and were often met with befuddlement because the Defense Department did not adequately explain the purchase to Congress. Why, seemingly out of the blue, the Pentagon was asking for more fourth-generation aircraft when then Air Force Secretary Heather Wilson had previously stated that achieving the proper mix of fighter aircraft meant buying stealthy fifth-generation planes, “not new fourth-generation aircraft.”

In the absence of a convincingly argued case for the F-15C replacement decision, the public debate devolved into a fight between Boeing’s F-15X, the modernized fourth-generation fighter, and Lockheed’s F-35A, the stealthy fifth-generation alternative. Framing the F-15X purchase as an either/or proposition vis a vis the F-35 makes for a compelling story but does not accurately capture the complexities of the case for replacing aging F-15Cs. Policymakers and observers have focused too often on comparing the capability and physical characteristics of each aircraft. In reality, Pentagon officials made the decision primarily based on mission requirements, short-term readiness concerns, and the long-term costs of operating the fighters.

Even so, because the comparison between F-15X and F-35A is shot through with uncertainties, the decision to purchase F-15Xs should be viewed as neither a slam-dunk nor a harebrained idea. However, the brouhaha over F-15X and F-35A distracts from far more important debates the nation should be having about the future of American airpower. The most valuable commodity in politics is time, not money—and the F-15C replacement debate represents a massive opportunity cost for an Air Force with nowhere near the capacity and capability to carry out its missions according to the National Defense Strategy.

“Out of the Blue”

The Pentagon proposes to buy 80 F-15Xs over the next five years, likely expanding to an eventual buy of 144 or more to “refresh” the F-15C/D fleet—and potentially the F-15E fleet down the road. The Air Force did not request these aircraft. Rather, the Pentagon’s independent cost-estimation shop—the Cost Assessment and Program Evaluation Office (CAPE)—ran its own analyses and eventually brought the Air Force around to its position, whether through convincing or by fiat. Either way, former Secretary of Defense Jim Mattis signed off on the decision.

Sen. Tammy Duckworth (D-IL) spoke for several lawmakers when she admitted that she was "a little bit confused" about the F-15X purchase, given years of watching the Air Force continuously pound the drums for fifth-generation aircraft. Rep. Donald Norcross (D-NJ) similarly mentioned that it made no sense for F-15X to be a last-minute decision since the Air Force knew about F-15C retirement for years. HASC Ranking Member Mac Thornberry (R-TX) spoke for many when he stated that the Air Force must convince lawmakers that the F-15C replacement strategy makes sense. The botched rollout by the Pentagon is all too familiar of late, as the building continues to fail to explain its actions and build relationships with Congress.

As the weeks have worn on, the Pentagon’s done a better job of detailing the case for purchasing F-15X, but its explanations have not yet convinced everyone that this is the right path to take. As Chairman of the Joint Chiefs of Staff Gen. Joe Dunford has admitted, the F-15X decision involved “four or five independent variables,” each of which demands analysis and inevitably engenders debate.

What is not up for debate, however, is that America’s aging F-15C fleet needs replacement, as its average aircraft age hits 35 years. When the iron laws of aircraft maintenance meet the cold calculus of compound interest, the bills begin to add up. Not only do older aircraft suffer from higher costs per flying hour, but those costs also increase faster over time. No matter whether the Air Force picks the F-15X or F-35A, the decision to replace F-15Cs pays for itself in less than ten years.

Costs of Replacing the F-15Cs

The Air Force has long known that its 235 F-15C/D Eagle air superiority aircraft face the end of their service lives in the mid-2020s. Most of these aircraft serve in Air National Guard units conducting the homeland air defense mission, intercepting Russian military aircraft and civilian aircraft that stray where they shouldn’t. And while several commentators have argued the F-15 purchase doesn’t “align with the National Defense Strategy," and its emphasis on the great power competition with Russia and China, that strategy itself tasks the Air Force with continued homeland air defense duties. As Air Force Chief of Staff Gen. David Goldfein notes, the F-15s are not going to make it to the 2030s, and “We have got to refresh the F-15C fleet because I can’t afford to not have that capacity to do the jobs and the missions right.”

The F-15s in question were supposed to have been replaced already by the stealthy F-22 Raptor. Then Secretary of Defense Robert Gates truncated that program in 2008 at 187 aircraft, far short of original plans for 750, and left the F-15s without a replacement. In the wake of that decision, the Air Force has squeezed extra life out of the Eagles, but airframes only last so long. How to deal with the retirement of F-15Cs has been a topic of conversation in the Pentagon for years, as it weighed the costs and readiness considerations of potential replacements.

As a baseline, the 30 year-old F15C fleet currently costs $42,000 per hour to operate, and that rate is growing quickly, which means that either the F-35A or the F-15X is cheaper to operate after about a decade. CAPE pegs new F-15X cost per flying hour at $27,000. Given extensive experience with the modern version of the F-15 airframe, those costs may be slightly higher or lower, but they are relatively well known. F-15Xs would enter service in the "mature phase" of the bathtub. In comparison, according to recent testimony by CAPE director Bob Daigle, the F-35A currently costs $44,000 per flying hour. However, the F-35A remains in the "immature phase" of the bathtub, and the Pentagon and Lockheed Martin plan to drive the cost per flying hour down to $34,000 per hour by 2024 and are shooting for $25,000 per hour by 2025, according to the head of the program. Achieving the ambitious goals for F-35A operating costs will not be easy. As the program head noted, “the 25 by 25 wasn’t generated by the program office nor by CAPE. It was a stretch goal given to us by our leadership.” And while the F-35 program has made steady progress on driving costs down, the F-35 still faces significant problems with spare parts availability, the Automated Logistics Information System, and depot-level maintenance.

If F-35 operating costs flatline at $34,000 in 2024, procuring F-15Xs instead of F-35A would save $1 billion by 2030 and about $3 billion by 2040. However, if the Air Force and Lockheed were to drive F-35A costs down to F-15X levels, there is almost no difference between the long-term business case for the two aircraft. In short, whether one assumes a worse or a better case for operating costs for the F-35, the “savings” in buying the F-15X rather than the F-35 is relatively minimal over the long haul in the grand scheme of the U.S. defense budget.

Apart from steady-state operating costs, other long-term factors undoubtedly played into the F-15X decision. While officials noted more frequently over time that they considered industrial base health into the decision, this claim should be met with skepticism given the nebulous requirements of the developmental sixth-generation fighter program. Further, U.S. allies and partners operate significant fleets of both F-35s and F-15s, rendering the argument for stimulating either production line relatively moot.

In addition to the relatively minimal differences in long-term operating costs, analysis shows that differences in initial costs don’t move the needle all between the options. The five-year upfront costs of both the F-15X and F-35A are remarkably similar. According to Air Force budget documents, the F-15X will cost an estimated $80 million per plane. F-35As currently cost $89 million a copy, and the Air Force will likely meet its near-term goal of $80 million a copy. Other upfront costs are also similar.