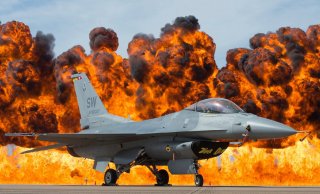 By 2019, increasingly open economic and security competition between the United States and China has have given plenty of fodder for international relations scholars fearing that the established and rising superpower are bound for conflict due to the so-called Thucydides Trap.

However, those dreading inevitable military conflict should remember that the course of history has plenty of surprising twists and turns. Just thirty years earlier, the United States was actually developing two upgraded jet fighters for China.

To understand why, requires grasping the evolving Cold War mindset of the 1980s. Formerly close partners, relations between Communist China and the Soviet Union deteriorated nearly to the point of war by 1969. However, China also remained hostile to the United States, which it had fought in the Korean War and actively opposed in Vietnam. Washington, meanwhile, did not even recognize Beijing in favor of the Republic of China based in Taiwan.

However, in 1971 Henry Kissinger used Pakistan, allied with both China and the United States, to secretly establish a diplomatic backchannel to Beijing. This blossomed in 1979 in the establishment of diplomatic relations. That year, China began dramatic reforms under Deng Xiaoping, opening the country to foreign businesses.

By the 1980s, the United States and China were aligned together against the Soviet Union. However, the Chinese defense sector had spent the preceding decade in near technological stasis due to the Mao’s Cultural Revolution, which disrupted university education for an entire decade and saw elite scientists and military officers exiled to the countryside to develop their farming skills.

Therefore, the Chinese military profited from warming relations with the West to pick up useful bits of military hardware, including French helicopters, Marconi fire-control computers from the U.K. and rifled L7 105-millimeter tank guns from Austria.

Seeing an opportunity to both reinforce China’s military and score some bucks, Defense Secretary Caspar Weinberger proposed “Peace Pearl” in 1983, a half-billion dollar upgrade of Chinese jet fighters with advanced U.S. avionic components from the F-16.

Three years later, China signed on. Weinberger said the deal would “improve the security of a friendly country which has been an important force for political stability and economic progress in Asia and the world.”

In fact, the PLA Air Force had to overcome considerable skepticism from the political establishment, which objected to comparatively steep cost of Western weapons. Furthermore, Chinese leaders feared becoming dependent on a foreign power that could cut them off in the future, as the USSR had.

Peace Pearl and the J-8II

In 1964, the Shenyang Air Corporation began developing China’s first truly indigenous jet fighter, the Shenyang J-8. Powered by two WP-7 turbojets, the J-8 nonetheless ended up resembling a lengthened single-engine Soviet MiG-21 (mass-produced in China as the Chengdu J-7) down to its open-nose jet inlet. Production of only 100 of the underwhelming fighters finally began in 1979.

Five years later, Shenyang produced an improved J-8II variant with two more powerful WP-13 engines with side-mounted inlets and a “solid” nose cone accommodating a weak mono-pulse radar with a search range of only twenty-five miles. Though capable of Mach 2.2 speeds, it lacked modern avionics and could not employ beyond-visual range missiles.

The Grumman corporation proposed to fix that deficiency by installing a Westinghouse solid-state APG—66(V) doppler radar used in the F-16A/B. This had a search range of ninety-three miles and was capable of detecting low-flying aircraft. The J-8 would also receive modern Head’s Up and multifunction displays, fire control computers, 1533B data busses, new ejection seats and a navigation system. Fifty-five J-8IIs would be so upgraded for $10 million apiece.

At least two J-8IIs were transferred to the United States and test-flown by Air Force squadron 6510. Forty-two Chinese military officers began working with U.S. officials at the Grumman facility in Bethpage, New York and Wright-Patterson Air Force Base in Dayton, Ohio. The $550-million-dollar project was by far the largest defense project between China and the United States.

On June 3, the Politburo authorized the PLA to clear Tiananmen Square by any means necessary. The next day, Type 59-II tanks upgraded with the Western guns opened fire on the and charged into protesters barricaded behind stacked bicycles. Over the next three days, at least 2,700 civilians were killed in Beijing, though the actual death toll may be four times as high.

The massacre led the United States and Europe to cease defense cooperation and embargo arms exports. That June, Chinese officers in the Peace Pearl program were told not to show up for work.

The post–Tiananmen embargo largely remains today, though states like the UK and France have exported supposedly “non-lethal” military technologies including sonars, radars and utility helicopters.

But in May 1990, the Beijing pulled the plug on Peace Pearl. Why?

As one program affiliate told the Los Angeles Times at the time, “This was China learning about the American defense industry and its cost overruns.”

Those amounted to an additional $200 million, or 40 percent over the agreed to $550 million deal. Reportedly, fitting the APG-66(V) into the J-8’s compact nose cone proved difficult. Furthermore, each J-8 transferred had a unique cockpit configuration, requiring Grumman to spend additional time and money developing a different interface for each.

While unfortunately near routine in U.S. defense programs, the overruns may have seemed like intolerable symptoms of bourgeois liberalism to the Chinese.

In other words, Beijing felt it was being ripped off. Afterall, it could produce three or four J-7 fighters for the cost of one J-8 upgrade.

Doubtlessly, the general post–Tiananmen defense-cooperation divorce also played a role in Peace Pearl’s demise. Grumman had also been jointly pursuing a project to create an upgraded “Super-7” (or Sabre II) variant for both Pakistan and China of the J-7 fighter costing $8-9 million and featuring F-16-derived computers and ejection seats.

The J-7’s open-nose inlet would have replaced with two side-mounted inlets for more fuel efficient and compact PW1120 and F404 engines, and an APG-66 radar situated in the new solid nose. The fuselage would have been stretched four feet three feet to carry more fuel for increased range, and its wings expanded three feet for improved maneuverability.

But an American variant of the classic Soviet MiG-21 too was scrubbed after Tiananmen.

China instead purchased Russian and Israeli assistance to upgrade the J-8-II. J-8’s today now boast beyond-visual-range capability, in part thanks to the transfer of Israeli EL/M-2035 radars. Israeli defense technology transfers to China continued late into the 1990s, including design documents for the canceled Lavi fighter, which evolved into China’s fourth-generation J-10 multirole fighter.

At least the termination of Peace Pearl may have saved the Pentagon from having to develop defenses against more of its own weapons systems.

China instead advanced its jet fighter production capabilities by inviting license-production of Russian Flanker jets on Chinese soil, and then reverse-engineering the aircraft into a still-growing family of domestic designs. Pakistan, meanwhile, jointly developed with China a sort of MiG-21/F-16 hybrid in its JF-17 fighter.

The rise and fall of Peace Pearl highlights pivot points in U.S.-China relations that continue to shape world today. More such pivot points may yet arise, so deadly conflict between the two nations is hardly “predestined.” However, sales of advanced weapons to Beijing probably won’t seem as tempting as it did in the 1980s.