The F-16 Fighting Falcon Can Beat Anything (Even Father Time?) 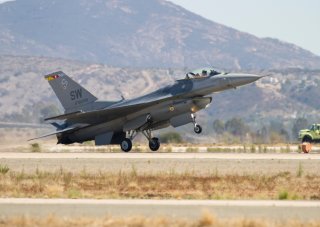 The Air Force is giving its 1970s-era F-16 fighter jet F-35 technology as part of a massive fleet-wide overhaul intended to improve targeting, attack precision and computer systems—to extend the fighter’s combat life all the way into the 2040s.

It might be tough to imagine that today’s Air Force F-16 dates back as far as the 1970s, a circumstance which might lead some to wonder how the combat aircraft has sustained its combat relevance and performance capacity into the dynamic threat environment of the 2020s.

The answer is actually quite extensive and goes back many years to the inception and preservation of an F-16 Service Life Extension Program (SLEP) which upgraded the upper wing skin and fittings, adjusted the bulkhead and canopy and gave the aircraft an F-35 Active Electronically Scanned Radar (AESA). With AESA, the F-16 incorporated an entirely new ability to find, detect and track enemy threats at much greater ranges. The aim of the SLEP was to extend the flight time of F-16s from roughly six-to-seven thousand flight hours to eight thousand or more flight hours. On top of that, the service’s confidence in the upgrades has led to a plan to have the F-16 fly all the way out to twelve thousand hours.

The AESA radar, which Lockheed developers say can track up to twenty targets at one time, is a massive upgrade beyond the F-16s previous mechanically-scanned radar. By virtue of its ability to track multiple targets, the AESA radar can scan in a 360-degree sphere to include horizontal, vertical and diagonal vectors.

Not surprisingly, the F-16 has also in recent years received new cockpit avionics to include moving map displays, video in the cockpit. digital graphics screens and new target tracking systems.  Upgraded F-16s also use a high degree of increased onboard automation to free up pilot focus and workload. By automatically performing a range of important procedural functions independently, a pilot is then freed up to focus more intently on other mission-critical tasks.

This upgraded F-16v technical foundation provided the technical starting point for Lockheed Martin’s next-generation F-16 specifically built for India called the F-21. Not only does the F-21 incorporate AESA, but the jet also integrates a high-tech, next-generation targeting system called Infrared Search and Track (IRST) technology. IRST, which is used extensively in F/A-18 Super Hornet fighter jets, is a passive, long-range sensor that searches for and detects infrared emissions. Much like the AESA, the IRST can track multiple targets at once and operate in an electromagnetic warfare environment. As a passive, long-range sensor, able to provide air-to-air targeting, IRST introduces new combat variables for the F-16.

In effect, while there are ultimately limits to how much an older aircraft can be upgraded, today’s F-16 is almost an entirely different airplane apart from keeping its basic airframe configuration.