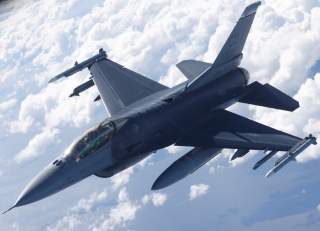 On the morning of Jun. 8, 1995, they found him, sprinting from the woods into a small opening, 9mm pistol in his hand in case there was enemy fire.

Both pilots were assigned to the 555th Fighter Squadron (FS), or the “Triple Nickel,” of the 31st Fighter Wing (FW)from Aviano Air Base (AB), northeastern Italy.

It was another routine combat air patrol in which they were flying an oval pattern over northwest Bosnia. As explained by Capt. O’Grady himself in his book Basher Five-Two: The True Story of F-16 Fighter Pilot Captain Scott O’Grady, there were known fixed missile sites along much of the route. “We knew to stay far away from the Bosnian Serb’s SAM rings to the north and to the east. SAMs—surface-to-air missiles—were a definite threat to an F-16, even with our high-tech defense systems.”

But there was a mobile site that had not been spotted by intelligence units.

O’Grady recalls: “‘Basher Five-One, mud six, bearing zero-nine-zero,’ Wilbur radioed to me on our open frequency. He wanted me to know there was possibly threat radar to the east. ‘Basher Five-Two naked,’ I shot back. That told him my threat warning system hadn’t picked up anything. On the same open radio frequency, I listened for Magic, NATO’s nearby airborne command center. Equipped with special Intel electronics, the airborne center served to help pilots as an early warning system. In touch with spy satellites and U-2 spy planes, Magic could tell Wilbur and me if there was active radar from the SAM rings to the north and to the east as well as in any other location. If the radar was coming from the north and the east, we didn’t have to worry because we were out of their missiles’ range. The blip on Wilbur’s threat warn-ing system would have been a false alarm. It took Magic only seconds to get back to us. ‘Basher Five One,’ a calm voice called over our radios, ‘your mud six report is uncorrelated.’

“Magic was saying that they couldn’t really confirm where the radar was coming from. Cautiously, Wilbur and I continued to fly our ovals. At exactly 3:03 P.M., Aviano time, my threat warning system showed a bright blip. I stared at my console in disbelief. At the same time, an alarm shrilled over my headset. I had been spiked by threat radar. Forget any threat from the north. This was coming from due east, just like the one Wilbur had picked up. Could it really be a second false alarm? My stomach did a flip. ‘Basher Five-Two, mud six, bearing zero-nine-zero,’ I said into my radio. ‘Basher Five-One naked,’ Wilbur reported back. Our roles had been reversed. It was now my turn to be hunted. I knew I had to prepare myself for the worst.”

Two  missiles were fired by 2K12 Kub (NATO reporting name SA-6 Gainful) mobile SAM launcher without radar assistance (so the Serbs could avoid being detected). The Serbs turned on the radar when the missiles were just seconds away from O’Grady’s and Wright’s jets.

O’Grady continues: “Through my canopy I scanned the skies for any evidence of a missile. The actual rocket that fires a SAM leaves a trail of white smoke. That smoke is a pilot’s only chance to make a visual identification. Once the rocket turns off, the smoke stops. Then the missile sails on toward its target, silent and deadly, at a speed almost twice as fast as my F-16. Seeing nothing in the sky, my eyes swam back to the video display on my threat warning system. The bright blip had not gone away, which meant I was still being spiked. A moment later, a second alarm blared over my headset. My glance jumped back to my screen. A new warning was there, brighter than the one before. This was all happening in seconds. Split seconds. But it was long enough for me to understand I had just been locked up by a target-tracking radar. This was the type that guided a missile to its target. While I didn’t know it, Magic had received information from a spy satellite that there were missiles right below Wilbur and me, but because of a garbled radio communication, we never got the message. It hardly mattered. My instrument panel had already delivered the bad news. I was in somebody’s deadly sights. As I thought out the meaning of those words, I realized a missile might already have been launched. I was angry that we had all been outsmarted by the enemy, but I tried to stay calm. This was what our years of training had prepared us for, and I was ready. A programmed voice from the plane’s computer system rang out over my headset. ‘Counter, counter.’ A second later, a brilliant red flash lit up the sky between Wilbur and me. A missile had passed between us, just missing us both. My heart sped up. I knew that SAMs were usually launched in packages of two. The chances were likely that another missile was already in the air, coming straight at me.

“As the adrenaline pumped through my veins, my thumb traveled down to the button that would release my chaff and flares. At the same time, I thought about pushing my aircraft into a series of steep climbs and dives to avoid the missile. I had time to do neither. What happened in the next tick of a second, I’m not sure. Wilbur would later tell me that he had screamed over the radio, ‘Missiles in the air!’ I never heard him. What I did hear was a thunderous roar that almost shattered my eardrums. Then came a blow like nothing I had ever felt. It was like getting rear-ended by an 18-wheeler with a rocket tied to its front grill. The missile had found its mark. A burst of flames and intense heat spread through my cockpit. I began to pitch and roll wildly. It felt as if a giant hand had reached down, grabbed me with brute force, and shaken me in a frenzy. What was left of my plane was like a straw in the wind, totally out of control. For all its space-age electronics, its supersonic speed, its defensive powers, the F-16 is not perfect. In the blink of an eye, it can be turned from the prince of the skies into a burning scrap heap of wire and twisted metal. The missile had blindsided me, coming up through cloud cover be-low. It had struck the plane’s underbelly, hitting one of the fuel tanks and cutting my F-16 in two. It took me another moment to understand. The nose and cockpit had broken away—and I was now in a free fall to Earth. As I spun out of control, I worried about blacking out from the sudden and unexpected G forces.

“I watched my console break and twist apart before me. My mind was outracing my ability to react. Flames from the exploding gas tank had found a crack between my oxygen mask and visor. They had also reached the back of my neck. Part of me was waiting for the cockpit to explode. Somehow, the heat and the pain and the insanity of the moment focused my thoughts. Dear God, I prayed, please don’t let me die now—don’t let me diefrom this. I gazed down, through the flames, and saw a fat yellow handle attached to my seat. The handle pushed up between my legs, bigger than life, staring at me like the miracle I took it to be. The beautiful words stamped across the top were impossible to miss, even in the fire and smoke: PULL TO EJECT. I had no idea how much time had passed since the missile had struck. In reality it had been only seconds. It felt like an eternity. I knew I wasn’t waiting much longer. For another microsecond, I worried that my damaged canopy wouldn’t open, or if it did, that the seat wouldn’t eject. But I really didn’t have time to worry. My left hand dropped down to the handle, and I pulled with all my might.”

According CNN, it would take him more than 25 minutes to fall into a clearing just south of a highway, making his white, brown, green and orange chute a trackable target. As he descended, O’Grady could see paramilitary soldiers in chase. He couldn’t steer his chute but fortunately no one was firing at him.

Compounding his crisis, his face and neck were burned by the explosion.

With forces closing in, O’Grady tumbled onto the ground, ripped off his chute, grabbed some of his survival gear and raced to the woods.

For almost a week he evaded the trigger-happy Serbian paramilitary forces that wanted to kill him.