F-22 Raptor: The Best Fighter in the World That Was Never for Sale 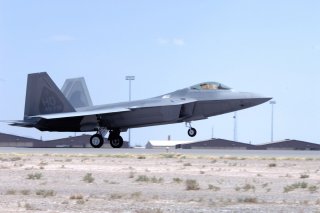 The U.S. Air Force F-22 is widely regarded as the most dominant fighter in the world, and while there has been much discussion about why its construction was truncated or halted, there has been much less conversation about a related, yet interesting question: Why was it never sold abroad?

After all, many of the most promising U.S. Air Force platforms, such as the F-15, F-16 and F-35 have for many years been sold extensively around the world to strengthen U.S. partnerships with allies and further fortify U.S. friendly military forces. Saudi Arabia, for instance, made an enormous F-15 buy in just the last few years, and the foreign reach of several U.S.-built fighters has been quite significant.

The U.S. has a history of selling export variants of major platforms abroad, to include even some adjusted variants of the Abrams tank.

Well, exact reasons may not be entirely available, and one typically tries to avoid wild speculation, yet there are several sensible variables to consider related to this question. Simply put,  it may simply be too superior and contain too many exquisite, performance-enhancing technologies. It has been known for years that there are of course many U.S. technologies simply not available for Foreign Military Sales, because they are simply too sensitive or high-value for even allies to have.

The F-22 may fall into this category. Why? Several reasons jump to mind such as its supercruise thrust ability, a technical system enabling the aircraft to sustain supersonic speeds without using afterburners. This is significant, as it not only increases speed but also naturally extends mission dwell time such that an aircraft can linger over target areas and hit more targets. It also conserves fuel in order for the stealth fighter to sustain high speeds for longer periods of time before having to return to refuel, a survivability-enhancing attribute.

Also, while its stealth configuration may be visible and therefore be somewhat “copy-able,” it is quite reasonable to assume that its radar absorbing materials and stealth coating may be decidedly unique and completely unknown. Very little is known about the composition of its stealth exterior, yet it would not be off-base to assume it is quite advanced. Also, the Air Force and F-22-maker Lockheed Martin have in recent years been conducting maintenance on the aircraft’s stealth coating.

Maneuverability is also quite likely another substantial reason why the F-22 has remained “U.S. only” for decades. The thrust vectoring and engine capacity may simply be unparalleled, and there may be reasons why early image renderings of 6th Gen aircraft do in some respects appear somewhat F-22 like in external configuration. Among other things, the F-22 is especially respected for its dog-fighting ability and air-to-air maneuverability, attributes which many contend separate it into a superior category compared with any other potential rival. This might be of great importance, especially given the well-known Chinese habit of stealing, or attempting to steal and replicate U.S. designs, platforms and technologies. For example, although it has a dual-wing configuration which is different from an F-22, the Chinese J-20 does have a wing-body external structure which does appear to closely resemble an F-22.

Finally, the F-22 is engineered with a unique weapons ability, a dynamic which has in recent years been massively upgraded. The Air Force, Raytheon and Lockheed have integrated performance enhancing software upgrades into the F-22s weapons, to include the construction of newer AIM-120D and AIM-9X air-to-air weapon variants.

Image: An F-22 Raptor flown by Col. Jeff Harrigian arrives June 2 at Holloman Air Force Base, N.M., June 2. Holloman AFB is one of four bases the F-22s will be assigned at. Prior to landing, the jets flew over the Tularosa Basin, giving community members a chance to see the new aircraft.