F-35 and F-15s: Learn How Israel Would Fight A War With Iran 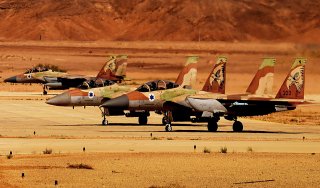 Key Point: Israel has a missile system that can counter Iran.

Michael Peck is a contributing writer at Foreign Policy and a writer for War is Boring. Follow him on Twitter:@Mipeck1. This piece was originally featured in July 2014 and is being republished due to reader's interest.