The F-35 Can’t Fire Its Cannon Without Committing Suicide 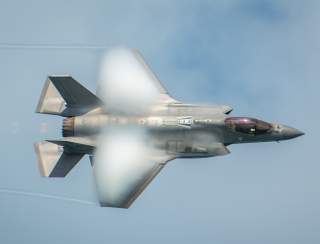 When the F-35 fires its 25-millimeter cannon, it doesn’t just damage enemy targets.

“The Joint Strike Fighter (JSF) program continues to carry 873 unresolved deficiencies,” said DOT “Although the program is working to fix deficiencies, new discoveries are still being made, resulting in only a minor decrease in the overall number of deficiencies.”

In particular, the F-35A – the land-based version flown by the U.S. Air Force and other nations – has a problem with its cannon, which is mounted internally inside the aircraft. “Units flying newer F-35A aircraft discovered cracks in the outer mold-line coatings and the underlying chine longeron skin, near the gun muzzle, after aircraft returned from flights when the gun was employed,” DOT&E found in its annual FY 2019 report.

Compounding the problem is that the F-35A’s cannon can’t hit the target, a problem that has been reported in previous years. “Based on F-35A gun testing to date, DOT&E considers the accuracy of the gun, as installed in the F-35A, to be unacceptable,” said the audit. “F-35A gun accuracy during SDD [the System Development and Demonstration phase of the program] failed to meet the contract specification. Investigations into the gun mounts of the F-35A revealed misalignments that result in muzzle alignment errors. As a result, the true alignment of each F-35A gun is not known, so the program is considering options to re-boresight and correct gun alignments.”

Software changes are supposed to improve the aiming of the cannon, and corrections are underway for gun installation, boresighting and hardware. But the new hardware and software has yet to be fully tested.

So for now, some F-35As are restricted in firing their cannon. “The U.S. Air Force has restricted the gun to combat use only for production Lot 9 and newer aircraft,” the audit noted.

Interestingly, the short takeoff and vertical landing F-35B and carrier-based F-35C – which carry their cannon in an external pod – did not have the same problem. “F-35B and F-35C air-to-ground accuracy results to date with the gun pod have been consistent and meet the contract specifications,” DOT&E found. “The results do not show the accuracy errors of the internal F-35A gun.”

Modern air combat centers on air-to-missiles that allow fighters to destroy their targets from a distance. But as U.S. F-4 Phantoms discovered over Vietnam, cannon are not obsolete. Lacking a cannon cost American pilots many a MiG kill, because dogfights frequently resulted in situations where air-to-air missiles either could not be fired or proved unreliable.

While the F-35 is supposed to be a silent assassin that uses its stealth and sensors to dispatch its victims by surprise, it is quite conceivable that the American jet will find itself in close-range combat with Russian fighters such as the highly maneuverable Su-57 and Su-35, which are more optimized for dogfighting.