The F-35 Is Clearly a Trillion Dollar (But Necessary) Headache. 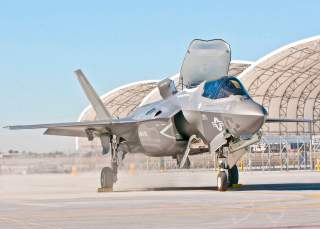 A few weeks ago, the Royal Australian Air Force took delivery of two new-build F-35A joint strike fighters—the third and fourth such aircraft to fly in Australian skies. They arrived a full seven years after the 2012 in-service date that appeared in early planning documents when Australia first signed up to the program in 2002. They cost about US$100 million each, around twice the price used in the early marketing by their builder, Lockheed Martin. They’ll need upgrades to their software in the next few years to meet some of the promised performance specifications and the RAAF will have to wait until sometime in the 2020s for them be able to operate with dedicated anti-ship missiles. And recently we learned of the aircraft’s higher than advertised support costs.

Despite that litany of failure to meet program targets, and the fact that would-be adversaries have now had 15 years to prepare their forces to encounter the F-35, it remains the most effective combat aircraft available from western suppliers. Barring budget issues, the F-35 will be the first choice of most advanced nations in the market when they’re looking to replace the fast jets in their inventories. On current plans, F-35s will still be flying well after 2050, and they are likely to form the backbone of Western airpower for the next two decades.

In Global defense procurement and the F-35 joint strike fighter, American academic Bert Chapman sets out to explore how the aircraft got to where it is today. Having followed the F-35 program closely for over a decade now (see my 2018 summary here), I read this book with great interest. It’s important that the strategic, program management and industrial elements of what over the aircraft’s lifetime will be a trillion-dollar investment in combat airpower are well understood—and even more important that the lessons its protracted and often mismanaged development can provide are digested. The book is certainly a timely contribution to public understanding of the largest defence project yet, as the F-35 starts entering service with the US and various export customers and has seen its first small-scale operational use in Israeli service.

At 400 pages, this book is a serious attempt to unpack the F-35 story. The research is thorough and the extensive reference list is a valuable resource. That’s especially true of the chapter on the development program and its tortured history with Congress and various US oversight mechanisms. The author has pulled together primary sources to produce a more complete story than I’ve seen in one place before; the reading list will keep anyone who wants to delve even deeper into the F-35 program busy for a long time.

That said, I can’t give this book an unqualified recommendation. The development history and associated political bun-fighting are well described, but the author is on less solid ground when it comes to strategic, budgetary and capability analysis. To give one simple example, on page 118 we find the cost reductions attained in the 2016–17 fiscal year described as ‘possibl[y] … achieved in response to President Donald Trump’s pre-presidential tweet that the program cost was too expensive’. Nope.

Also less than compelling is a chapter on the history of jet fighters, which explains the notion of aircraft ‘generations’—a construct that many analysts consider an unnecessary and potentially misleading way to think about air combat. Much of the poorly informed public debate that has plagued the F-35 over the years has fixated on what constitutes a ‘fifth generation’ aircraft, with an associated checklist of characteristics that varies depending on whether one seeks to sell the F-35 or disparage it. (The discussion hasn’t been helped by marketeers blurring the picture by pitching upgrades to 40-year-old designs as ‘generation 4.5’ capabilities.)

Like every other combat aircraft, the F-35 will succeed or fail not just on its technical merits, but also on the way in which it’s employed and supported by other force elements and—crucially—the totality of adversary capabilities it faces. The fact that China and Russia now have aircraft that tick some fifth-generation boxes might be very significant—or it might not. History shows that victory in air combat depends on technical capabilities, numbers, geography and other factors that combine in ways that don’t simplify down to a list of airframe characteristics.

In the chapter on the F-35 in Australia, the book describes the often acrimonious public debate that surrounded the program for the best part of a decade. It’s reasonable at dissecting the various arguments that did the rounds, including the seemingly damning simulations performed by arch critics of the F-35 that were picked up and amplified by the ABC and other media outlets. But again the analysis is let down by giving too much space to views that don’t really warrant it, and then by not rebutting them adequately. To be fair, the author is ultimately right in saying that ‘Australian opinion on the JSF is as divided as opinion in other participating countries … although it appears that there is enough support … across the political spectrum for the JSF to continue despite the cost overruns, repeated production delays and financial problems’.

Similarly, the overall conclusions in the book are hard to argue with:

Despite the JSF’s protracted financial and technical problems and the fiscal constraints facing many JSF partner countries, which have caused them to reduce defense spending, emerging military airpower and geopolitical and technological trends make purchasing the JSF the least problematic military aviation alternative for the US military and its international allies.

It’s salutary to ponder that the US and its allies are collectively spending hundreds billions of dollars on the ‘least problematic’ air-combat capability. But that’s a consequence of an overly ambitious and, for most of its first decade, poorly run program that tried to do too much in one platform.

This article by Andrew Davies first appeared in the Australian Strategic Policy Insitute’s The Strategist in 2019.

Andrew Davies is a senior fellow at ASPI and lectures on defence acquisition at the Australian National University. This article is adapted from a book review appearing in the latest issue of Security Challenges. Image courtesy of the Department of Defence.