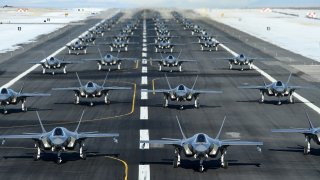 Close air support from the United States and NATO allies could be vital to help defend Ukraine if Russia chooses to invade.

Ukraine is already armed with American-produced Javelin anti-tank missiles to engage Russian armored vehicles. A mix of high-altitude bombers, reconnaisance aircraft, drones, and manned fighters would all be useful for providing air support in Ukraine. While the legendary A-10 Warthog is known as a standout close air support (CAS) asset, newer fighters such as the F-35A Lightning II, F-22 Raptor, and other NATO aircraft could also contribute.

“It’s important to recognize that CAS is a mission but not an aircraft,” retired Lt. Gen. David Deptula, Dean of the Mitchell Institute for Aerospace Studies, told the National interest in an interview. “Thinking it can only be done with an A-10 is anachronistic and dangerous. Our capability to conduct CAS has exploded by the ability to deliver precision-guided effects.”

The F-35 is capable of providing CAS to ground using its speed, precision-guided air-to-ground weapons, and low altitude maneuverability. An F-35 could also maneuver close enough to the ground to fire its 25mm cannon on Russian tanks, armored vehicles, or forces on the move.

Fixed-wing aircraft have already been used in CAS missions. The F-22 was used in combat missions in Syria. The F-35 was also initially developed to fill a CAS role. As Deptula said, aircraft such as these are armed with precision-guided weapons and long-range sensors to destroy enemy forces from standoff distances.

“From a close air support perspective, largely, as I look at our force, we continue to find opportunities to go train, largely with our partners across Europe,” Gen. Jeffrey L. Harrigian, Commander, U.S. Air Forces in Europe, U.S. Air Forces Africa and Allied Air Command and Director, Joint Air Power Competence Centre, told The Mitchell Institute for Aerospace Studies. “Honestly, I feel very comfortable that as we talk about how we would operate with their joint terminal air controllers, their entities on the ground, from the Baltics down into the Med and even into Romania, we have had continued interaction with them that has allowed us to keep our close air support capabilities at the right level and continue to improve our readiness.”

Russian air defense capabilities would also matter in this equation. If the United States and NATO establish air superiority with fifth-generation aircraft, the Russians might seek to deploy mobile, ground-fired anti-aircraft weapons. Short-range Russian air defense weapons, roughly comparable to the American Short-Range Air Defense system, may be effective against drones and helicopters but could struggle against faster aircraft flying at higher altitudes. A sufficient presence of fifth-generation aircraft from the United States, NATO, or other European countries could even deter Russian decisionmakers from a possible ground attack.