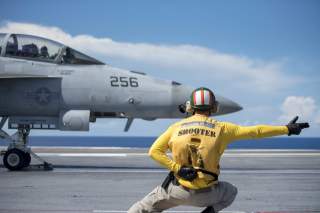 Key point: "The idea of a robot wingman is that it can keep pace with manned planes, but be tasked out for parts of the mission that you wouldn't send a human teammate to do."

Boeing is preparing to test prototype wingman drones, apparently at a secretive site in the Australian Outback.

The Australian subsidiary of the Chicago-based plane-maker is developing the so-called “Airpower Teaming System” using company funds as well as $27 million from the Australian military.

Boeing revealed the 38-feet-long Loyal Wingman drone at the Australian International Airshow at Avalon in February 2019. The drone has the distinctive, sharp angles of a radar-evading stealth aircraft.

But the most novel part of the Airpower Teaming System/Loyal Wingman is invisible. Algorithms and radio datalinks allow human operators aboard manned planes or on the ground to command the highly autonomous drones.

“The idea of a robot wingman is that it can keep pace with manned planes, but be tasked out for parts of the mission that you wouldn't send a human teammate to do,” said Peter W. Singer, author of Wired for War.

A Boeing video depicts the Loyal Wingman drone flying in formation with an F/A-18 fighter and an E-7 radar plane, both of which Boeing builds for the Australian air force. "The Boeing Airpower Teaming System is designed to team with a wide range of existing military aircraft from fighters to commercial derivative aircraft," said Ashlee Erwin, a Boeing spokesperson.

Fast, armed and highly autonomous drones could scout ahead of manned planes and add their missiles to an aerial dogfight. It's a compelling concept for a small air force such as Australia's that trains to fight much larger air arms such as China’s. The Australian air force has just 110 fighters. The Chinese air force has no fewer than 1,400.

“Forces around the world are looking to maximize and extend their current fleets in a way that balances the need for quantity, capability and affordability,” Erwin said.

But the wingman drone hinges on cost, Ewen Levick explained at IEEE Spectrum. “To keep [costs] down, the wingman uses what Boeing calls a ‘very light commercial jet engine’ to achieve a range of about 3,700 kilometers (2,300 miles), roughly the distance between Seville and Moscow. The internal sensors are derived from those miniaturized for commercial applications.”

Additional savings have come from Boeing’s prior investments in automating its supply chains. The composite exterior is made using robotic manufacturing techniques first developed for commercial planes at Boeing’s aerostructures fabrication site in Melbourne, the company’s largest factory outside the United States.

The approach has yielded an aircraft that is cheaper, faster and more agile than today’s drones. The most significant difference, however, is that the wingman can make its own decisions.

“Unmanned aircraft that are flown from the ground are just manned from a different part of the system. This is a different concept,” [Royal Australian Air Force air commodore Darren] Goldie says. “There’s nobody physically telling the system to iteratively go up, left, right, or down. The aircraft could be told to fly to a position and do a particular role. Inherent in its design is an ability to achieve that reliably.”

Setting the exact parameters of the Loyal Wingman’s autonomy—which decisions will be made by the machine and which by a human—is the main challenge. If too much money is invested in perfecting the software, the wingman could become too expensive; too little, however, may leave it incapable of carrying out the required operations.

To refine the software, Boeing has been experimenting with digital prototypes as well as surrogate testbed aircraft. Flight-testing of the three full-scale Loyal Wingman drone prototypes could begin soon at the Woomera Prohibited Area test site in southern Australia. The RAAF wants by the mid-2020s to be able to weigh a decision on actually fielding the wingman drones.