The F-35 Is Getting Cheaper: Is It Time To Buy More Stealth Fighters? 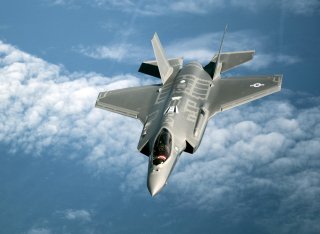 Since its conceptual inception, the F-35 fighter jet has been known as an extremely expensive aircraft that can fill multiple roles. This high-priced “Swiss Army knife” of fifth-generation fighters is intended to replace fighters in the Air Force, Navy, and Marine Corps.

The down side always has been the cost. As good as the F-35 is, obtaining sufficient numbers to cover all of America’s global challenges and responsibilities has been daunting.

That has begun to change—the price of the fighter jet has been dropping.

Congress has recognized this and is authorizing more planes than the Department of Defense requested. The time for even more action is now. Both in acquisition costs and operating costs, the numbers are telling.

First, acquisition costs are way down. In 2016, the Defense Department put a lot of pressure on Lockheed Martin to find a way to lower the cost. The target was $80 million per plane by “lot 14”—or a purchase order scheduled for 2020.

Lockheed Martin is determined to continue ramping up to 165 per year, and to garner additional cost savings per unit.

We should be riding this positive momentum and taking steps to buy more F-35s as soon as possible.

This is not even the best news. In regards to operations and sustainment costs, the potential savings are even greater. Lockheed Martin owns a 45% share of overall costs, so it has a huge incentive to lower those costs. Keeping in mind the macro perspective is vitally important, scale matters.

Lockheed Martin has decreased dramatically the operating cost of the F-35. The cost/flight hour in fiscal year 2019 has been reduced by $4,600, or approximately 10%.

The five-year estimated projection is huge: a 50% reduction for Lockheed Martin’s share of operations and sustainment costs. At the same time, mission capability rates have increased from 58% in 2018 to 71% in 2019.

Costs per flight hour can be reduced more if there is a long-term, performance-based contract. Currently, Lockheed Martin can’t buy future parts that it knows it is going to need.

No contract, no purchase—so the company can’t gain economies of scale. Additionally, it wouldn’t be able to take advantage of true predictive analytics. This is wasteful and inefficient.

Added to that, imagine if the armed services also applied some of the same predictive analytics practices. Presumably, the services’ share could be reduced sharply as well. This would further drive down costs and would allow services to increase the acquisition ramp rate.

If the services cannot do this, services will short procurement, which ultimately hinders the National Defense Strategy and our competition with potential adversaries such as China, Russia, and Iran.

Some experts are saying America also should be buying additional legacy aircraft (or legacy with product improvements). These include the F-15EX, the F-16, and the F-18E/F.

They were all fine aircraft in their day, and can play a role in low-intensity conflicts (with no major enemy air capability), but they have no viable missions in a high-intensity, near-peer competitor fight, which we are likely to face in this century.

In fact, if American pilots aren’t flying fifth-generation aircraft (including the F-22, F-35, and B-21) before we have to face a near-peer competitor, they likely will be vulnerable and a liability in the big fight.

Now, you might say that having these older planes around to fight in “other wars” is worth it, and a fair use of scarce funds. We might agree, except they are in fact quite costly, and not nearly as versatile as the F-35.

The F-15EX, for example, costs nearly $88 million, and gives our forces no help in a fifth-generation fight. Why spend more for less?

The only downside of going all in for more F-35s is that it wouldn’t underwrite other parts of the defense industrial base. We’re sympathetic to this, but it is not the role of the nation’s defense dollars to keep businesses running.

The Pentagon always should seek competition in sources, but it is not a welfare program for defense contractors.

When money is short, and threats are getting more sophisticated, the nation needs to buy what works most effectively, in the most situations, for the lowest price.

The goal must be more planes of the best variety at the lowest acquisition cost and with the best operating costs.

It gives all the key attributes needed in a high-intensity fight: stealth, electronic warfare, processing power, sensors, and a capability to integrate with allies.

The F-35 can do all the low-intensity missions as well as or better than any of the legacy planes. In other words, there is no reason not to plow the investment into the better plane that can be had for a lower price.

The F-35 can do most missions with a tenth of the number of aircraft compared to what is in use now. For a country with a global mission set, that is a huge multiplier. Two of the less expensive planes can do what takes 20 fourth-generation aircraft to do.

That’s in the professional opinion of pilots currently flying the F-35. The math should be easy, even for Washington wonks.

In short, this is no time to back off the gas pedal. The Department of Defense and Congress must push hard, fill as much of our shortfall as soon as possible, and gain all the monetary advantages available.

A great many serious deficiencies in America’s air capabilities have begun to be addressed. That is good news. The drops in prices and proof of the F-35’s capabilities are great news.

Taken together, these facts define a potentially historic opportunity to ensure American air dominance well into the 21st century. There is no downside. The time to act is now.

Philip S. Bucci is a retired Army officer, where he served as a senior combat trainer. He is an NRA instructor and the western states training coordinator for Raidon Tactics.